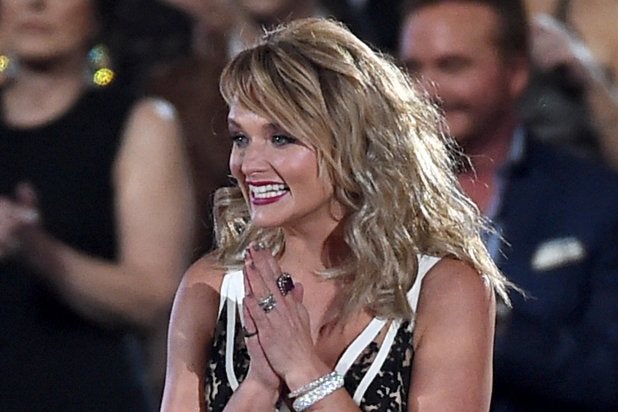 The Academy of Country Music Awards celebrated 50 years of honoring the best in country music throughout Sunday’s ceremony, and set a Guinness World Record for most attended live awards show, according to co-host Blake Shelton. Luke Bryan joined Shelton for hosting duties for the third year, which saw the venue change from Last Vegas to AT&T Stadium in Arlington, Texas.

In honoring its past, the ceremony opened with a tribute to Merle Haggard and a performance by George Strait, called the “king of country music” by the hosts. Strait was one of seven honorees of the 50th Anniversary Milestone Award, joining Garth Brooks, Brooks & Dunn, Kenny Chesney, Miranda Lambert, Reba McEntire and Taylor Swift.

As has become tradition with music awards shows in recent years, the bulk of the night was filled with 23 live musical performances spread across two separate stages.

Lambert was the most-nominated artist of the night with eight, walking away with three awards on top of her Milestone Award. Her win for Female Vocalist of the Year marked her sixth consecutive win in that category, setting a new ACM Awards record.

Luke Bryan took home Entertainer of the Year, while Jason Aldean was Male Vocalist of the Year. Vocal Group of the Year went to Little Big Town, while Florida Georgia Line nabbed Vocal Duo of the Year.

There were some non-country appearances throughout the night, including musical performances from the likes of Christina Aguilera performing with Rascal Flatts, and Nick Jonas taking the stage with Dan + Shay.