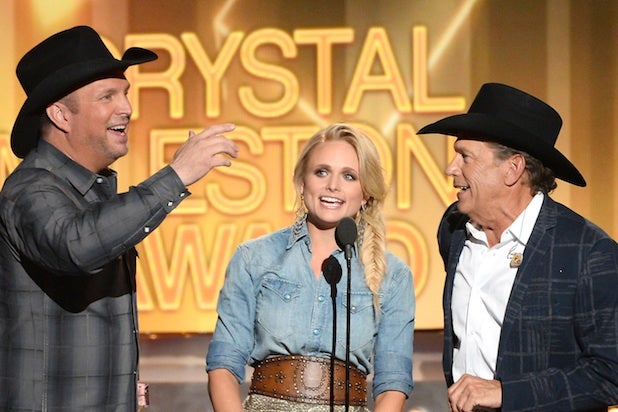 Strait was named Entertainer of they Year, an award that the fans voted on up until the trophy was awarded. The 61-year-old also performed “I Got a Car,” which earned him a standing ovation from the crowd.

Urban won three awards: Vocal Event of the Year as performer and producer along with Lambert for “We Were Us.” Urban earned his third trophy for Video of the Year with Tim McGraw and Taylor Swift for “Highway Don’t Care.”

Lambert won for the fifth consecutive year as Female Vocalist of the Year, and is now the record holder for the most consecutive wins in that category. She is the leading female winner of the night, with a total of three trophies (tying with Urban). She took the prize for Single Record of the Year for “Mama’s Broken Heart,” and Vocal Event of the Year for “We Were Us” with Urban.

Strait also participated in a special moment with Dallas Cowboys owner, president and GM, Jerry Jones, during the telecast in which they announced that next year’s 50th Annual ACM Awards will be broadcast live from AT&T Stadium in Arlington, Texas on Sunday, April 19, 2015 at 8 p.m. ET.

See all the winners below:

ENTERTAINER OF THE YEAR
George Strait

VOCAL GROUP OF THE YEAR
The Band Perry

NEW ARTIST OF THE YEAR PRESENTED BY KOHL’S
Justin Moore