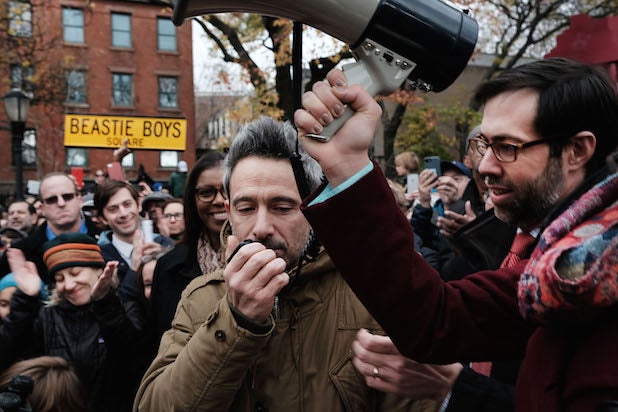 There is no place for neo-Nazi white nationalism in the realm of the Beastie Boys.

Adam Horovitz a.k.a. Ad-Rock spoke Sunday at an anti-hate rally held at a Brooklyn park that is named in memory of the late Beastie Boys’ Adam Yauch after it was defaced with swastikas on Friday.

The playground at Adam Yauch Park was spray-painted with swastikas along with the message “Go Trump.”

Also Read: Stephen Colbert Predicts Coal for Christmas from Trump: 'We Are Screwed'

Hundreds of people, including families with children, showed up to the event as Horowitz and community leaders spoke out against racism and intolerance.

“This is real. It’s happening at a rapid rate. We gotta stand up against hate,” said Horovitz (via Jezebel). “Spray painting swastikas in a children’s playground is a messed up thing to do. This is more about someone in our community linking Nazi Germany to Donald Trump in a ‘hell yeah’ kind of way in a park where children play.”

“As a parent, if you’ve got kids, you want to tell them this isn’t OK,” said actor-director Ben Stiller (via NBC New York), who was also at the event.

Following the Nov. 8 election, there has been a surge of racially-motivated hate. The Southern Poverty Law Center has now collected more than 700 reports of harassment from around the country.

“If you’re able to volunteer, volunteer,” urged Ad-Rock. “If you’re a musician, write that anthem. If you’re a writer, write. Take what you’re good at, and what you truly enjoy, and lend your services to the causes you care most about. ‘Cause we can’t, and we won’t, and we don’t stop.”

The swastikas — symbols of the German Nazi Party which carry a message of anti-Semitic symbolism — have now been covered and replaced with heart shapes that include messages of love written by local children (see below).

.@beastieboys Adam Yauch Park in Brooklyn Heights was left defaced with ugly symbols of hate today. This cannot be the new normal! pic.twitter.com/xWjS7HLNyG

The park was named after Yauch following his death in 2013.