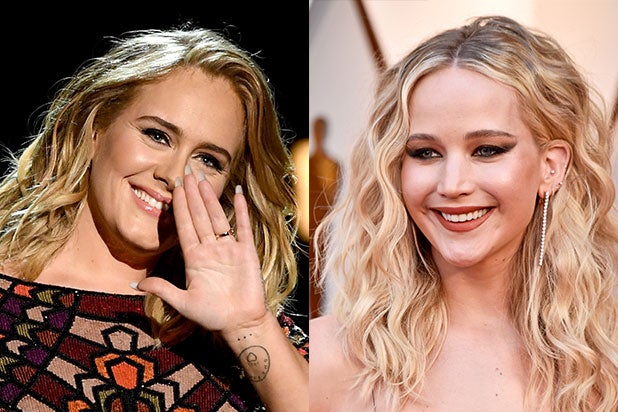 Adele and Jennifer Lawrence really lived it up on Friday night as they hit up New York City gay bar Pieces, where the “Hello” singer played a round of musical shots… and was promptly tackled by her bestie when she lost.

According to Entertainment Weekly, the duo went to the Greenwich Village bar during a drag show hosted by Brita Filter. Adele took part in musical shots (which, yes, is musical chairs but with shots), singing to Kylie Minogue’s “Can’t Get You Out of My Head.” When the music stopped, she didn’t get a glass, so JLaw pushed her to the ground and said, “How could you lose?!”

Someone in the crowd then told her, “Jennifer, this isn’t ‘The Hunger Games’!”

Other videos have started circulating on Twitter and Instagram from their big night out. In one video, the Grammy winner is on stage with Brita Filter, telling the crowd, “Hi, I’m Adele!” and that she’s currently a stay-at-home mom.

Lawrence and Adele have been best buds for a while — in 2015, they had a big outing with pal Emma Stone in New York, as well.

See below for videos from the BFF’s Friday night shenanigans (be sure to click right, as it’s a carousel).

Jennifer Lawrence literally got Adele down to the floor for losing at a musical shot game ???? pic.twitter.com/TuhLQbdurF

@adele and #JLaw walk into a gay bar to see @thebritafilter’s show…. ???????????? then #JLaw tackles @adele for loosing musical shots! ???? Last night was wild. Thank you to everyone who came out. ❤️???? #BritaFilter #AnythingButPure #Drag #DragQueen

And @Adele is on stage at Pieces tonight. Oh boy, this is fun pic.twitter.com/e7fesvNIEI