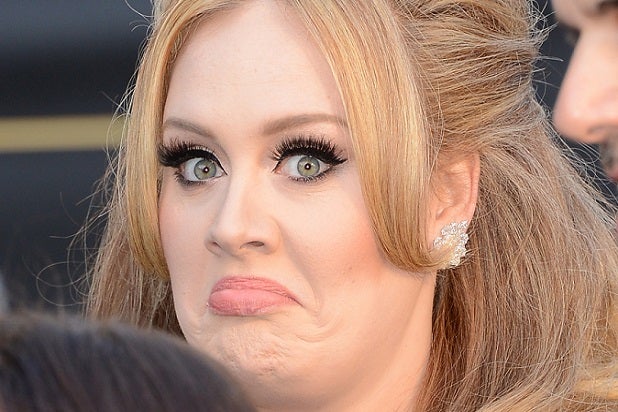 Sure, she got the offer, the English singer-songwriter told fans at a Los Angeles concert on Saturday. But, as the 28-year-old pop star put it, “That show is not about music and I don’t really — I don’t dance or anything like that.”

Rumors started to swirl about Adele’s Super Bowl prospects after a story in The Sun claimed show organizers were doing everything they could to recruit the popular singer to what’s historically one of the most-watched events on television.

An NFL source allegedly told the British publication: “There is nobody bigger in the world than Adele right now and organizers are doing absolutely everything they can to try to persuade her to sign up. She’s sold out every date on her tour, everyone wants a piece of her and they know they can bank on her bringing in the viewers.”

Adele set everyone straight Saturday night at her Los Angeles Staples Center concert, saying, “First of all I’m not doing the Super Bowl.” She also corroborated reports that she was invited to perform: “So they were very kind. They did ask me but I did say ‘no.’ I’m sorry but maybe next time.”

The Sun’s alleged NFL source blamed the singer’s nerves, saying “It hasn’t been an easy sell.”

Also Read: Adele to H&M: Hello? Why Are You Declining My Credit Card?

“I’m going to do a dance album next time,” Adele added on Saturday. Hey, maybe then we’ll see her shake her thing on behalf of good old American football.

Here is a fan video that captured Adele’s comments at the concert in L.A.:

Beyonce’s performance of “Formation” at Super Bowl 2016 sent shock waves of controversy through social media, with some praising her for a bold political statement, others questioning if her berete dancers were too polarizing, while others calling it “a race-baiting stunt.”

The whole show, also featuring Coldplay and Bruno Mars, received widespread criticism for not being cohesive. But hey, at least no censorable flesh made it into the broadcast as it did during 2004’s Janet Jackson and Justin Timberlake performance.