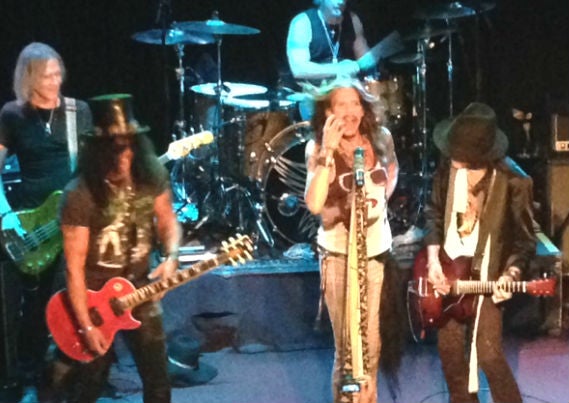 Some might say it was too early to rock, but Steven Tyler and his Aerosmith bandmates hit the stage at 1 p.m. Tuesday for an invite only performance at the famous Whisky A Go Go, a West Hollywood club they last played in 1973.

The performance officially introduced the band’s upcoming “Let Rock Rule” North America tour, and included a cameo from Tyler’s long-time friend Slash, who will join Aerosmith on the road, along with Myles Kennedy and the Conspirators.

Tyler, characteristically playful as usual, addressed the crowd as “Ladies and Genitals” and asked the packed house, “Do you love this band almost as much as I do?” Then the band played a 40 minute set that included Aerosmith hits “Pink” and “Walk This Way.”

Almost half an hour into the set, Slash (and his top hat) joined Aerosmith on stage for “Mama Kin” before launching, much to the crowd’s delight, into an instrumental version of Guns N’Roses’ “Welcome to the Jungle” after which Tyler gave an honorary shout out to Axl Rose. (Guns N’Roses and Aerosmith, both signed to Geffen, toured together for Aerosmith’s Permanent Vacation Tour in 1988.)

Despite the loose and laid back vibe, the songs were warm, energetic and seamlessly delivered, but also you really can’t go wrong with Tyler’s yowls coupled with Perry’s riffs. At the end of the set, Tyler gave one of his many bracelets to someone in the crowd, before taking a fan’s cell phone and snapping a “selfie.”

The “Let Rock Rule” tour begins July 10 in Wantagh, New York, and makes it way to The Forum in Los Angeles on July 30.