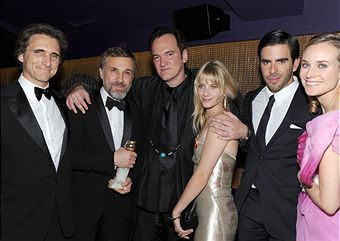 (An “oneg” is the social reception of food and soft drinks following Jewish religious services).

When not chatting about Leno vs. Conan within the safety of the darker and louder after-parties, the lobby served as the temporary cross roads of the industry on Sunday night. (For full coverage of the community’s pulse on NBC at the parties, see Sharon Waxman’s “The Talk is of Conan.")  As the central artery connecting parties tucked away in ballrooms, penthouses, and restaurants, the lobby itself was one of the prime tickets.
Mickey Rourke told TheWrap that the best part of the show was “sitting next to my girlfriend," while “The Office” writer/actor Mindy Kaling gave her top-joke-of-the-night award to her creative forefather, Ricky Gervais, for his “Mel Gibson” zinger.
Early in the night, Chace Crawford and the mohawk man — "Glee’s" Mark Saling — separately obliged requests to be the meat in “sandwich photos”. 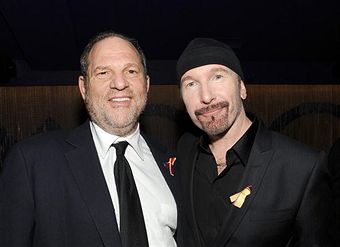 On his way to the Weinstein Co. party (inside the former Trader Vic’s), Eli Roth told TheWrap his goal for the night: “I’m trying to have sex with a cast member from ‘Nine’”.
Nicole Kidman and Keith Urban were also headed in that direction, drawing so much attention that “Nine” director Rob Marshall managed to trail behind them unrecognized by the press line. Infiltrating the Weinstein bash “Basterd” style,” “Up in the Air’s” Anna Kendrick also slipped by most post-show lookee-loos by speed walking … alone.  Best Supporting ActorWinner Christoph Waltz (pictured above with "Basterds" crew) brought the lone gold to the Martini & Rossi sponsored bash. Taylor Lautner held court at a crowded table till late as U2’s The Edge chatted up the host (right). 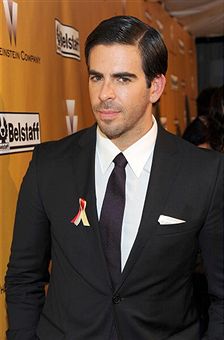 There were no indications that Roth succeeded in his goal, but he did admit getting a text from a friend making fun of his “Mad Men” hairstyle (left). In separate messaging news, when Rita Wilson couldn’t reach Globe winner Michael Sucsy (“Grey Gardens”) across the crowded HBO party to congratulate him in person, she emailed him instead. About three hours after the win, Sucsy said he was up to 65 facebook updates and 50 congratulatory text messages. And for the record, he swears a Globe is “much heavier” than an Emmy.
Elsewhere, a tipsy looking Ben Silverman (wearing gray sneakers with his tuxedo) downloaded all his hard invites to a thankful friend before leaving.
Nearby, a tired Gabourey Sidibe was not in the mood for the impromptu photo line that had gathered near the exit while waiting for her car. She hid behind a pillar.
Joshua Jackson, who stars on Fox’s “Fringe," did not keep his Leno vs. Conan talk private — when asked which team he was on, he replied “Team … not NBC.”
(All photos by Getty Images)