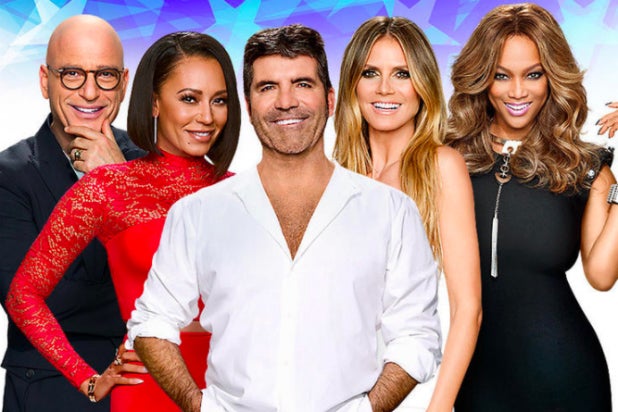 NBC’s hit variety competition “America’s Got Talent” has re-upped all four judges and its host for another run, TheWrap has learned. Howie Mandel, Simon Cowell, Mel B., Heidi Klum and presenter Tyra Banks have all signed on the dotted line for Summer 2018’s “AGT” — a premiere date will be announced soon.

Mandel is the longest-running judge on the talent show — the upcoming Season 13 will mark his ninth-straight. Spice Girl Mel B. and “Project Runway” host Heidi Klum both joined the program in 2013. Cowell effectively replaced Howard Stern 2016, and Banks took over for Nick Cannon just last year.

“Talent” is a TV ratings juggernaut. Last summer, the show’s Tuesday edition averaged a 3.5 rating in the advertiser-sought 18-49 demographic and had 16.0 million viewers overall. The Wednesday telecast earned a 2.9 in the main demo and 14.7 million total viewers. All of those Nielsen numbers include a week of delayed viewing, and made Season 12 the most-watched “AGT” to-date.

The Tuesday episodes were the season’s No. 1 show and the Wednesday ones were No. 2. Furthermore, “AGT” served as the lead-in to the third-biggest series of the summer, “World of Dance.”

“America’s Got Talent” was created by Cowell and is co-produced by FremantleMedia North America and Syco Entertainment. Cowell, Sam Donnelly, Jason Raff, Trish Kinane and Richard Wallace are the executive producers.