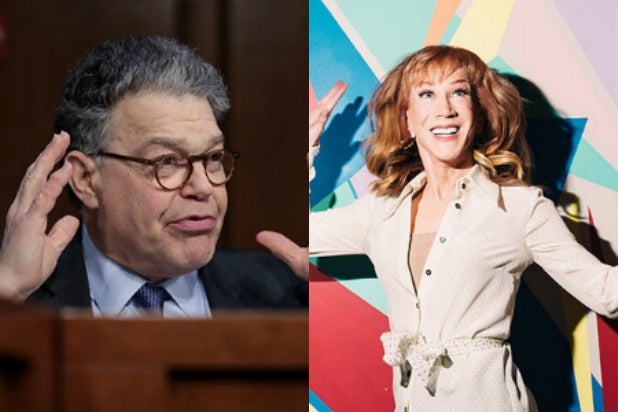 Sen. Al Franken is the latest high prominent figure to distance himself from comedian Kathy Griffin, following her controversial photo shoot in which she held what appeared to be President Trump’s decapitated head.

The Democratic senator said on Thursday that he’s changed his mind and decided “it would be best” for Griffin to no longer attend an event promoting his new book, “Giant of the Senate.” He had scheduled her to appear back in July. On Wednesday, Franken had said he would still like her to attend despite the backlash to her photos. Thursday’s stance was a reversal.

“I believe what Kathy Griffin did was inappropriate and not something that should be anywhere in our national discourse,” the Minnesota senator said on Thursday, according to Politico. “I consider her a friend and I’m glad she realized she crossed the line and apologized.

“After hearing from many Minnesotans who were rightfully offended, I’ve come to the conclusion that it would be best for her not to participate in the event we had previously scheduled. I understand why Minnesotans were upset by this, and I take that very seriously.”

After the controversial images were released Tuesday, Griffin issued a mea culpa, saying she “went too far.” The list of those who have condemned the photos is a lengthy one and includes Donald and wife Melania.

Meanwhile, CNN announced that she will no longer appear as co-host of its annual “New Year’s Eve Live” program, Squatty Potty dropped Griffin as a sponsor, and Route 66 Casino in New Mexico canceled her stand-up appearance that was scheduled for July.

Griffin’s been a contributor to the campaigns of Franken and other Democratic politicians, although Sen. Catherine Cortez Masto (D-Nev.) announced plans this week to donate the $1,000 received from Griffin to charity, according to Politico.