A version of this story about Alden Ehrenreich first appeared in the “Dark Horses We Love” feature in The Race Begins issue of TheWrap’s Oscar magazine.

But Alden Ehrenreich has been battling greater forces than villains causing trouble in distant galaxies — like his Hollywood competition and stubborn casting agents. For years he’s fought his way into rooms and landed jobs with Woody Allen, Park Chan-wook, Sofia Coppola and two different projects with her dad, Francis Ford Coppola.

History will say 2016 was Ehrenreich’s breakout year thanks to his landing that “Star Wars” spinoff, as well as his starring role in Warren Beatty’s “Rules Don’t Apply” — but if you want proof of his considerable talent, look at February’s “Hail, Caesar!”

The A-list-heavy Coen Brothers comedy (George Clooney, Josh Brolin, Tilda Swinton, Scarlett Johansson and Channing Tatum also star) opted not for cheap dazzle, despite its Old Hollywood setting. Instead, it went for intrigue in its depiction of the world of a shady studio fixer. Despite being a lesser-known cast member, Ehrenreich overcame the odds to stand out as a pastel-colored big screen cowboy in the style of Gene Autry.

“They showed me a clip of Roy Rogers breaking into song in one of his movies,” Ehrenreich told TheWrap of his character, Hobie Doyle. “I think the movie takes a very loving look at the practices of Old Hollywood that seem strange to us now.” That included cowboy boot camp for Ehrenreich: lasso lessons, horseback riding, stunt training.

He shines particularly in two scenes, starting with the one when his bumpkin accent gets in the way of transatlantic dialogue he’s got to recite for a refined British director (Ralph Fiennes), a moment so hilarious that Universal distributed the clip online before a trailer had been cut.

Also Read: Who Is Alden Ehrenreich? 6 Things to Know About the New Han Solo 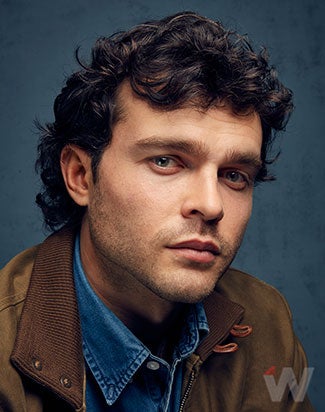 But there’s also a gem when Hobie meets another young actor, Carlotta (Veronica Osorio), who relates to his life as a Hollywood commodity — and also knows when to turn on the star quality.

“I remember Joel [Coen] saying that we were like two circus performers — so the way we get to know each other is to show each other our tricks,” Ehrenreich said of the sweet scene where he finally gets to show off his lasso. We have a feeling he has a few more up his sleeve.

This winter, Ehrenreich will indeed pull on the famous vest of Han Solo — an iconic role played by Harrison Ford, whom the young actor does anticipate meeting at some point.

“I haven’t asked yet but I’m hopeful it will happen,” Ehrenreich said of Ford, adding that “his spirit has been pervasive” in conversations about the upcoming film directed by Phil Lord and Chris Miller.

Emilia Clarke recently joined the cast, as did a previously announced Donald Glover in the role of Lando Calrissian.