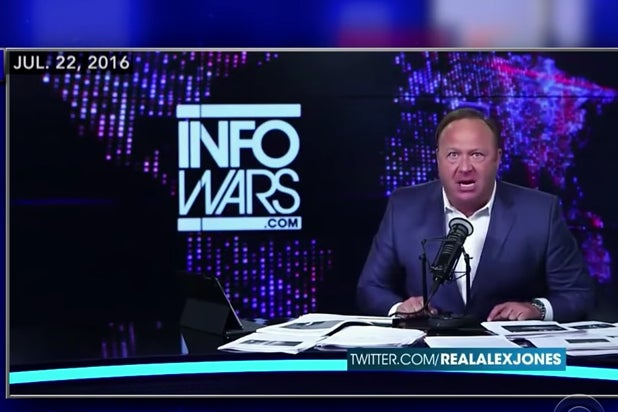 “China pulls the strings of big tech now. Choose a side. Soros is proud of you,” Jones told TheWrap via text.

Twitter, however, has no plans to remove Jones from its platform. A person with direct knowledge of how Twitter is handling the situation said InfoWars is not currently in violation of the company’s policies.

Pressure, however, began to build almost immediately, with professional Jones watchers and haters publicly asking what Twitter and its chief Jack Dorsey would do about InfoWars.

All of these removals put @Twitter and @Jack in the very uncomfortable position of being the only major social network to disseminate @infowars. Imagine explaining that to your employees!

if @jack and his fellow doormats here can get through the week without banning Alex Jones they have a shot at getting away with it. don't let them. bug them till they do one defensible fucking thing

He still has a blue check on @Twitter. Your move, @jack. Be a leader with integrity like @tim_cook

So @Twitter is the last social media site left to ban Alex Jones. ????‍♀️ he spreads hate and violence. Come on just end his terror please.

Now can we get Alex Jones off of @Twitter, too?

Alex Jones and Infowars hate speech is now shut down on:

Is this your platforms legacy @jack? @TwitterSafety?