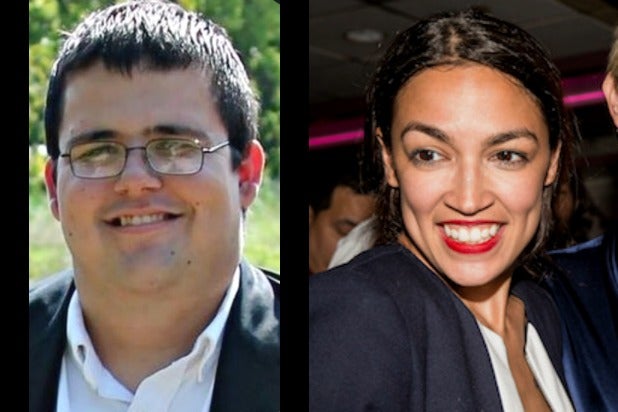 “Wow! A Republican journalist calling me the B-word as he deliberately misinterprets my statement,” Ocasio-Cortez wrote. “Awesome job. How many female leaders have you covered in your career? I’m sure your coverage was very fair and not subconsciously biased at all.”

Ocasio-Cortez was responding to a since-deleted tweet by Moates, who according to The Hill, quote-tweeted Ocasio-Cortez earlier Friday, saying that “there is a new standard in Congress. Bitches will subpoena you if you troll them.”

In a statement to TheWrap Saturday morning, Moates defended his tweet, calling Ocasio-Cortez a “witch.”

“Alexandra Ocasio Cortez is Congresswoman-elect and her behavior is making her seem like a dictator,” Moates said. “It is against the law to abuse your power and that is what she did when she threatened to subpoena Donald Trump Jr. over a meme.”

He continued: “She also has shared numerous facts that are inaccurate including saying that there are 3 branches of Congress. Also, let’s not forget that she wants to starve America’s children by implementing socialism. She is a witch. She will have an ethics complaint waiting for her when she gets to the House of Representatives. She is not a dictator but she is acting like one. Time to grow up.”

Moates, whose Twitter bio says he’s written for conservative outlets including, DC Examiner, The Blaze and IJR, also tweeted on Saturday: “Anyone who wants people to starve in this country due to the effects of socialism will always be a b*tch,” the tweet said.

Reps for Ocasio-Cortez did not immediately respond to a request for comment Saturday.

The entanglement started when Ocasio-Cortez responded to Donald Trump Jr. after he posted a meme on Instagram that insinuated that democratic socialists, and Ocasio-Cortez particularly, eat dogs.

Also Read: Newsmax Host Gets Schooled for False Claims About Alexandria Ocasio-Cortez: 'You're a Know Nothing Shmuck'

Ocasio-Cortez, pictured in Trump Jr.’s post, is captioned asking, “Why are you so afraid of a socialist economy?” Below her, President Donald Trump is seen responding, “Because Americans want to walk their dogs, not eat them!”

In a Twitter post, Ocasio-Cortez politely reminded Trump Jr. that she will be part of a Democratic majority in the House in January, a job that comes with subpoena power.

The exchange prompted Moates to attack Ocasio-Cortezrtez, calling her the B-word in a tweet that has since been taken down.

Wow! A Republican journalist calling me the B-word as he deliberately misinterprets my statement.

Awesome job. How many female leaders have you covered in your career? I’m sure your coverage was very fair and not subconsciously biased at all. https://t.co/FZOsVY92EP