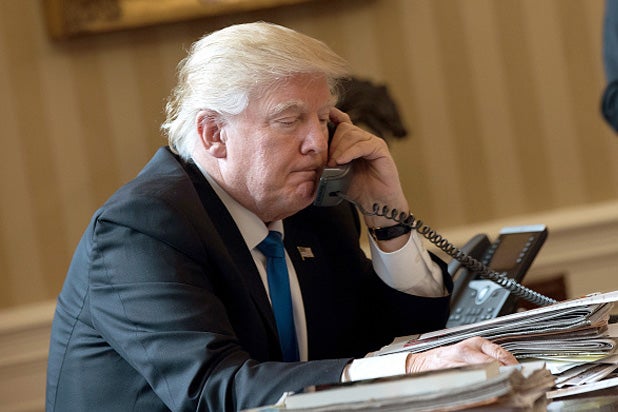 President Donald Trump faced a social media backlash Friday in response to a report that he requires his female staff “to dress like women.”

Trump, according to a “campaign source” in a report published February 2 by political news site Axios, requires his male staffers to “dress sharply.” Women, on the other hand? “He likes the women who work for him ‘to dress like women’,” the report says.

‘Even if you’re in jeans, you need to look neat and orderly.’ We hear that women who worked in Trump’s campaign field offices — folks who spend more time knocking on doors than attending glitzy events — felt pressure to wear dresses to impress Trump.”

Unsurprisingly, women of various professions took issue with the alleged dress code and the way it singles out female staffers specifically by their gender. Almost immediately the hashtag#DressLikeaWoman was born, with firefighters, doctors, soldiers, scientists, engineers, etc posting pictures of themselves at work wearing the required, gender neutral uniforms of their jobs.

“This is how I rolled in Afghanistan,” said a U.S. Army veteran about a photo in full combat uniform. “Biologists get the best accessories,” said scientist Janet Ng along with a photo of her holding a very un-neat and disorderly snake. Even newly-minted California Senator Kamala Harris joined in tweeting a succession of photos of trailblazing women whose job uniforms failed, including Astronaut Mae Jemison, the first African American woman in space.

Also Read: Kellyanne Conway's Outfit Mocked: 'This Is What Happens When the Gays Won't Dress You'

Check out some of the photos below.

I’m just going to assume this is what @realDonaldTrump meant when he said #DressLikeAWomen #NotoriousRBG #WomensMarch pic.twitter.com/ajFP2zGWIv

#DressLikeAWomen loving their matching outfits. I better they’re even protecting our country. #bansteveBannonpic.twitter.com/AmZBEZJiHw

To the White House: here are some ways to #DressLikeAWoman. pic.twitter.com/WZqzjrIXti