“Hey,@realDonaldTrump, Listen the f— up. I was sexually assaulted twice. Once when I was a teenager. I never filed a police report and it took me 30 years to tell me parents. If any survivor of sexual assault would like to add to this please do so in the replies,” Milano wrote, adding the hashtag “#MeToo.” In another tweet, she added the hashtag “#WhyIDidntReport.”

A rep for Milano did not immediately respond to TheWrap’s request for comment.

In Trump’s tweet, he said that he assumed charges would have been filed with local police right away if Ford’s accusations are true. The majority of sexual assaults in the United States — 63 percent — go unreported to police, according to the National Sexual Violence Resource Center.

“I have no doubt that, if the attack on Dr. Ford was as bad as she says, charges would have been immediately filed with local Law Enforcement Authorities by either her or her loving parents,” Trump tweeted. “I ask that she bring those filings forward so that we can learn date, time, and place!”

Ford accused Kavanaugh of sexually assaulting her at a party when they were both in high school in suburban Maryland. In a letter to Sen. Dianne Feinstein, Ford said that “it is upsetting to discuss sexual assault and its repercussions, yet I felt guilty and compelled as a citizen about the idea of not saying anything.”

Kavanaugh denies the accusations and said in a statement distributed by the White House, “I categorically and unequivocally deny this allegation. I did not do this back in high school or at any time.”

Hollywood has supported Ford in her accusations, and many have pointed out reasons survivors of sexual assault often don’t report right away, including fear of backlash from their assailant’s camp and uncertainty whether police will or can help.

See Milano’s and Trump’s tweets below. 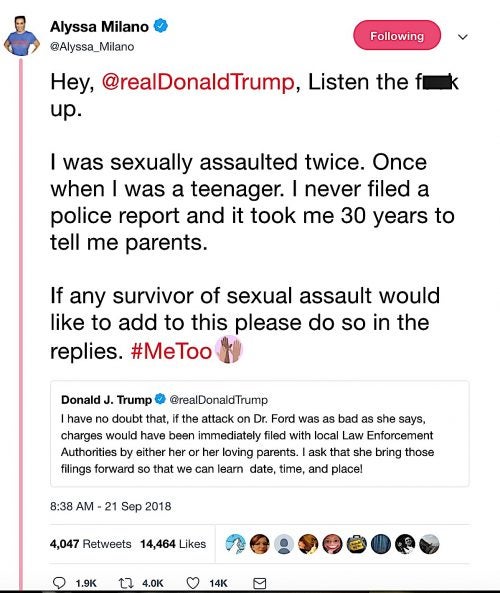 From ”Roger & Me“ to ”Bowling for Columbine“ and beyond