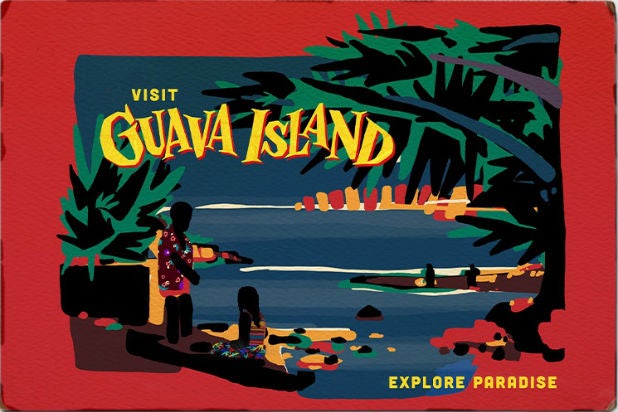 Fans of Donald Glover’s musical alter ego Childish Gambino who aren’t also Amazon Prime customers will still be able to watch his new film when it premieres this weekend — for a while at least.

Amazon announced Wednesday that “Guava Island,” Glover-as-Gambino’s mysterious new film, will stream free at www.amazon.com/guavaisland for the first 18 hours after its debut Saturday April 13 at 12:01 a.m. Pacific. It will be available exclusively to Amazon Prime Video subscribers after that time.

The film will also stream one time only at Twitch.tv/primevideo at 5 p.m. Pacific on Saturday — one hour before the free window on Amazon elapses.

Directed by Glover’s frequent collaborator Hiro Murai and written by Stephen Glover, “Guava Island” also stars Rihanna, Nonso Anozie and “Black Panther” breakout Letitia Wright. Little is known about the project other than that it was filmed in Cuba. Per the film’s logline, it is “an expansion of Glover’s idea of freedom. In creative and business terms.”

“I’m really humbled having the opportunity to present something this timely and timeless. Between Rihanna and the people of Cuba, this is one of my favorite projects I’ve ever worked on,” said Glover in a statement.

“Guava Island is the end result of four incredible weeks spent in Cuba with some of the most inspiring creative talents I’ve ever met,” said Murai. “Designers, performers, musicians, and filmmakers came together from all over the world to create this crazy fever dream of a production.”

“Guava Island” was produced by Fam Udeorji, Carmen Cuba, Donald Glover and New Regency, which financed the project. It was executive produced by Stephen Glover, Hiro Murai and Ibra Ake. Amazon Studios acquired exclusive distribution rights while it was still in postproduction.

“Guava Island” will have its world premiere at the Coachella Music Festival on Thursday, the day before Glover headlines Friday night as Childish Gambino. It will screen in a specially constructed theater built for the event and will continue to play until the end of the festival.