For starters, company net income slipped year over year, which is attributable in part to an increased restructuring cost, according to the SEC filing. And while overall net revenue ticked up a hair versus the comparable three months of 2015, this Q3’s top line still clocked in quite a bit below media analysts’ estimates.

Wall Street had forecast $1.02 in earnings per share (EPS) on revenue of $660.58 million, per a Yahoo Finance-compiled consensus. AMC actually reported 91 cents of EPS on $634.65 million in revenue.

Sans the $19.3 million restructuring expense, Q3 diluted EPS would have been $1.11. In July, AMC offered a buyout to 200 longterm employees. At the time, the company expected about a 10-20 percent acceptance rate from staff members with 10 or more years experience.

TV ratings at the National Networks (AMC, WE tv, BBC America, IFC and SundanceTV) didn’t do their parent brand any favors, either. Ad sales at those five dropped nearly 10 percent on a cumulative basis due to lower tune-in.

“We continued to execute on our long-term strategic goals during the third quarter,” President and CEO Josh Sapan said in a prepared statement. “Building on its reputation as a world-class brand with premium content, AMC has five of the top 10 shows on basic cable in key demos for the most recent broadcast season. This success is driving AMC Networks’ financial performance and is placing us on track to deliver solid results for full year 2016.”

“Recently, AMC debuted the seventh season of ‘The Walking Dead’ with a powerful episode that was watched by more than 20 million viewers, making it the most watched program on television for the fifth consecutive season, among key demos,” Sapan continued. “Across the company, our programming continues to resonate broadly and is desirable in both linear and non-linear environments. We continue to participate in emerging streaming TV offerings, most recently joining the new DirecTV Now service, in addition to Sling TV and Sony’s PlayStation VUE. Through our growing AMC Studios operation, we continue to produce, create, own and distribute premium content that provides us with substantial economic benefits and positions us well for long-term success and growth.” 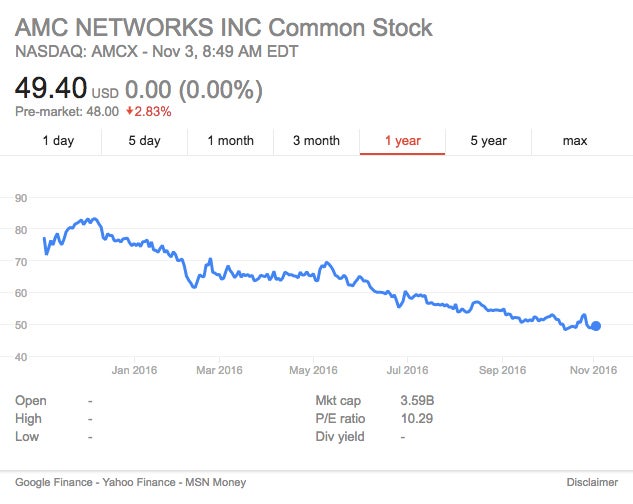 Executives will host a conference call at 11 a.m. ET this morning to discuss the results in greater detail.