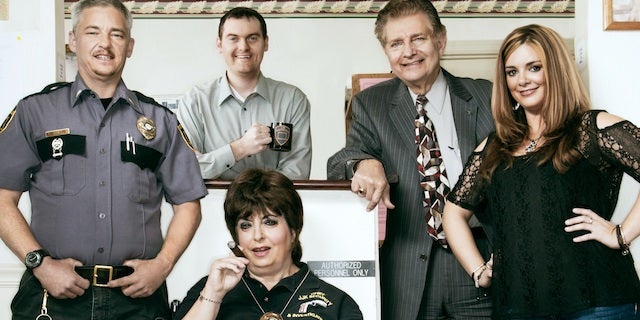 AMC has cemented itself as the cable channel that does reality programming a bit differently from other networks. And "Small Town Security" is a good example of how it applies its tagline, "Something More," to its unscripted fare, which includes the newly renewed "Freakshow" and "Comic Book Men."

"Small Town Security's" crack team of private investigators are back for a second season starting Thursday, May 9. And TheWrap has a first look at the new cast photos plus a preview of a promo that will start airing this week.

If you didn't catch Season 1, then you really don't know what you're missing. The team from Ringgold, Ga.'s JJK Security are some pretty off-the-wall individuals.

It starts with Joan Koplan, a former Hollywood starlet who still yearns for the spotlight. She's madly in love with her husband, Irwin, who turns a blind eye to Joan's office flirtation with the head of their security team, Dennis Croft. Croft would do anything to win over Joan's affections, but therein lies a twist. As revealed on Season 1, Croft used to be a woman.

Here's what to expect on Season 2 from AMC:

Fame or infamy? In Ringgold, Georgia, the owners and employees of JJK Security have welcomed America into their unorthodox universe as the stars of AMC’s non-scripted workplace series “Small Town Security” – and local opinion has been extremely divided. Some Ringgold residents love the show; others in this conservative Southern town are less inclined to embrace the idiosyncratic, expletive-strewn exploits of JJK’s founder, Chief Joan Koplan; her hoarding husband, Captain Irwin Koplan; and their employees, the incomparable Lieutenant Dennis Croft, private eye Brian Taylor, and receptionist Christa Stephens. But anyone expecting Chief Joan and company to tone it down has another thing coming. As Joan so eloquently puts it, “People are entitled to their opinion. But shut up already, it's not a porno movie.”

“Small Town Security” returns for a second season of straight-up and serious security work, love triangles with a twist, sarcasm served over easy, and a generous helping of stranger-than-fiction scatological humor that will draw you in and make you look away, all at the same time. In the new season, Irwin goes on a sales offensive and grooms a new apprentice, the loquacious but grammatically-challenged Christa. With her Parkinson’s disease in check, Joan is feeling like her frisky self once again…and is finally free to let loose. Dennis continues to take exciting steps forward in his gender transition from female to male, while always maintaining his single-minded devotion to JJK and his beloved Joan. As always, Brian keeps the proverbial trains running on time – while Lambchop, Joan’s terror of a Chihuahua, keeps up a steady pace of napping, snapping and leg-humping. The rabbit hole continues to run deep in the darkly funny world of “Small Town Security.”

And below, watch the new promo which revisits a scene from last season.