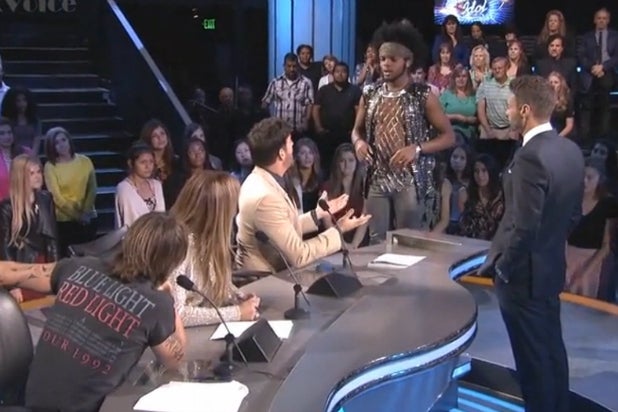 Well, that was uncomfortable. Harry Connick Jr. took “American Idol” contestant Quentin Alexander to task on Wednesday’s show when the contestant fell out of line following his performance and declared, “This whole thing is wack.”

After a solid rendition of Lenny Kravitz‘s “Are You Gonna Go My Way,” Alexander sported quite the sourpuss look, despite getting mostly positive feedback. Host Ryan Seacrest asked what’s up.

“This sucks,” Alexander said, gesturing to the Bottom 2. “We have two of the best vocalists, my best friend is sitting over there, this whole thing is wack — and I’m going to shut up right now.”

Seacrest tried his best to save the increasingly awkward moment. “Let me tell you something, the Bottom 2 there — at the end, anybody could be saved with that vote. It could be your friend, OK? So let’s un-wack it.”

Then for some reason it sounds like judge Jennifer Lopez yells off-camera, “I love you baby!”

Connick Jr. wasn’t so supportive of the pot-shot. “I don’t understand that at all, I don’t get that,” he said, asking, “Are we at commercial?”

“No, no we’re live,” replied Seacrest.

“Oh, good,” the New Orleans singer said. “I was going to say, Quentin, if it’s that wack, then you can always go home, because ‘Idol’ is paying a lot of money to give you this experience and for you to say that to this hand that is feeding you right now, I think is highly disrespectful.”

Lopez and third judge Keith Urban uncomfortably tried to help the moment, weirdly taking the contestant’s side. The crowd sure didn’t help matters either, cheering for the wrong guy in the dispute due to the emotions involved.

Alexander then marched over to the judge’s table and made it worse.

“When I said that this was wack, I wasn’t saying THIS is wack,” he declared, gesturing to the entire studio. “THAT is wack,” he explained, pointing to the Bottom 2.

“For my personal feelings, it sucks to see two people who I’ve grown to love go home,” he continued. “That’s what I mean by it being wack. So, I’m not disrespecting this competition.”

“I’m glad I got to clarify that for you,” the defiant Alexander concluded his tantrum.

The show went on; Alexander’s pal Joey Cook was indeed voted off.