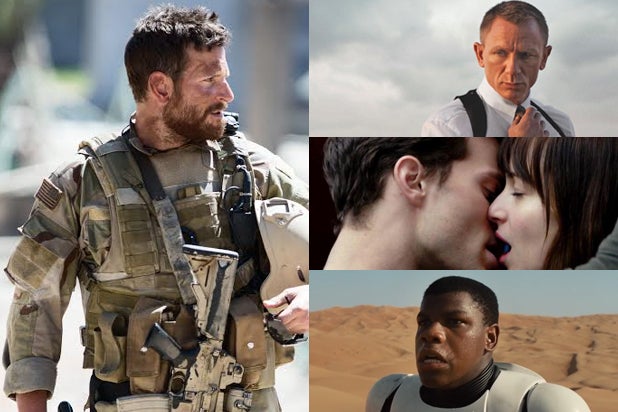 Hollywood’s hopes for a record 2015 box office have received a shot in the arm from the electrifying run of “American Sniper,” which has driven one of the biggest January hauls in history.

Going into the weekend, overall domestic box office grosses for January were at nearly $900 million, of which Warner Bros.’ Iraq War saga had contributed $213 million, a little less than a quarter of that. Only January of 2010, when James Cameron’s “Avatar” was dominating with 30 percent of $924 million, has been bigger.

The fast start has 2015 running  7.2 percent ahead of last year’s box office at a similar stage. It’s roughly flat compared to 2013, which wound up the highest-grossing year ever at $10.9 billion, paced by “The Hunger Games: Catching Fire,” “Iron Man 3” and “Frozen.” That’s a positive sign, since the 2015 movies with the most blockbuster potential are still to come. And there was more upbeat news Thursday, with Fandango reporting that January ticket sales were better than any month last year.

“Despite my long-held conviction that 2015 will be the first to hit $11 billion in North America, I expected the first quarter to face its toughest comparisons, since 2014 actually started off strong with ‘Lone Survivor’ and other films that gave us a boost before the bottom fell out once summer started,” said Paul Dergarabedian, senior media analyst at box-office tracking service Rentrak.

“This will be followed month after month by a slate of relentlessly strong product which should give the industry that record-breaking year that we so need in the wake of the letdown that was 2014,” Dergarabedian said. Last year’s domestic total was $10.3 billion, five percent under the record-breaking 2013 haul.

Super sequels and some of the most well-known franchises in nearly a decade are on the slate, including “Star Wars: The Force Awakens,” which arrives at Christmas.

“If Hollywood ever set out to build the perfect box-office beast of a year, whether by design or happy accident, 2015 is it,” Dergarabedian said.

He didn’t, but we will. Among other movies with the muscle to score big at the box office on the 2015 slate are “Mad Max: Fury Road,” “Pitch Perfect 2,” “the second film in the “Divergent” series “Insurgent,” earthquake thriller “San Andreas,” the animated “Minions,” “The Fantastic Four,” Guillermo del Toro‘s “Crimson Peak,” Disney’s animated “The Good Dinosaur” and the franchise finale “The Hunger Games: Mockingjay – Part 2.”