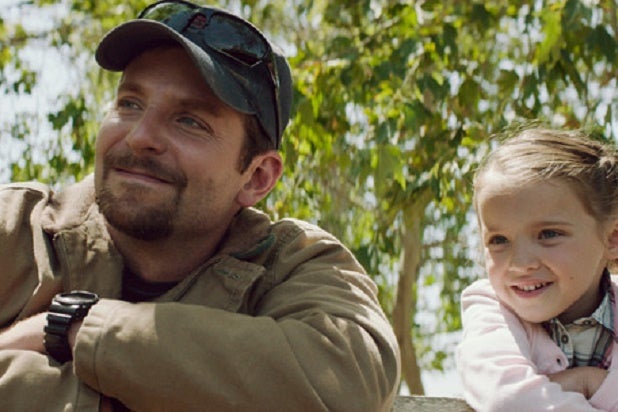 “American Sniper” stormed to a record $30.5 million at the box office Friday in its first day in wide release, fueled by patriotic passion and a strong showing at the Academy Award nominations just one day earlier.

The Clint Eastwood-directed Iraq War drama starring Bradley Cooper blew away analysts’ projections with the biggest single day ever in January, and now has in its sights a massive $80 million haul over the four-day Martin Luther King weekend. It will pass the $41.5 million that “Ride Along” debuted with last year for the best three-day January opening ever at some point Saturday for distributor Warner Bros.

“Paddington,” a family film about the charming bear beloved by Brits, is giving Kevin Hart’s “The Wedding Ringer” a run for second. The Weinstein Company’s live-action/CGI hybrid opened with a better-than expected $4.6 million Friday. It could overtake the Sony Pictures’ comedy co-starring Josh Gad, which did $6.9 million Friday, when the kiddie crowd turns out over the long weekend. But both films are on pace to finish at around $24 million for the four days, which would give “Wedding Ringer” the best January debut ever for an R-rated comedy.

The weekend’s other wide opener, Legendary Entertainment’s cyber thriller “Blackhat,” is tanking. It managed just $1.3 million on Friday, and the $70 million hacking saga directed and co-written by Michael Mann is on pace to finish the four days with less than $5 million and out of the top ten for distributor Universal Pictures.

The civil rights drama “Selma,” also nominated for a Best Picture Oscar, was running fifth, behind last week’s No. 1 film “Taken 3.” Fox’s Liam Neeson franchise finale muscled up $4.2 million Friday and will finish at around $17 million in its second weekend.

Paramount Pictures’ “Selma” brought in $2.3 million Friday from 2,235 theaters, up by 56 from its wide opening last week. That projects to $10.4 million for the four days, underwhelming given the tale of the 1965 Montgomery-to-Selma marches will be tied in with ceremonies marking the MLK holiday across the nation.

Most of the Best Picture nominees saw a modest boost.

“The Imitation Game” was seventh Friday with $1.8 million for TWC. That projects to an $8.7 million four-day total for the historical drama starring Benedict Cumberbatch. It averaged $1,175 per from its 1,611 theaters Friday, after adding 45 locations.

Fox Searchlight nearly doubled the theater count for “Birdman” to capitalize on its Best Picture nomination and the dark comedy starring Michael Keaton brought in $403,000 from 471 locations, an $855,000 per-location average.

The Stephen Hawking biopic “The Theory of Everything” took in $509,000 after Focus Features added 101 theaters. That pencils out to a four-day total just over $1 million and a $2,120 per-location average.

“American Sniper,” which co-stars Sienna Miller, received a rare “A+” CinemaScore from audiences. They liked it even better than the critics, who have it at 73 percent positive on Rotten Tomatoes.

The story of a lethal marksman who returns to his family a changed man has struck a major chord with Heartland audiences and military families. That, along with the boost from its Oscar buzz, powered it well beyond the projections of analysts, who saw it coming in somewhere north of $50 million over the days.