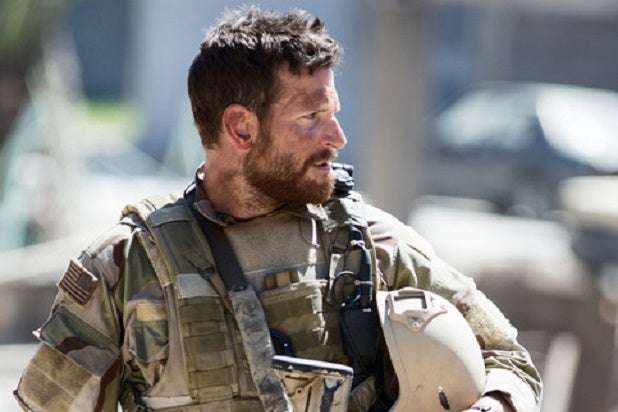 The Iraq War saga “American Sniper” soared like a superhero movie at the box office, with a $64.3 million second weekend in wide release that would make any caped crusader proud.

The Clint Eastwood-directed telling of the tough return home by Navy SEAL Chris Kyle, played in the movie by Bradley Cooper, continued its electrifying run with the best second weekend ever by an R-rated movie. In the process, “American Sniper” hit the $200 million mark in domestic grosses just 10 days after earning nominations for Best Picture, Best Actor  and four other Oscar nominations.

The grosses for the weekend’s other movies were merely mortal, but fun because of the big names behind the films that opened.

Jennifer Lopez scored with the sexy low-budget thriller “The Boy Next Door,” which was a distant second with $15 million for Universal Pictures. But Johnny Depp’s box-office skid continued as his ensemble comedy “Mortdecai” tanked with about $4 million for Lionsgate Entertainment. And “Strange Magic,” the quirky animated kids musical from “Star Wars” creator George Lucas, never took off and finished with $5.5 million for Disney.

The passionate back-and-forth plainly didn’t hurt, and may actually have helped, by keeping “Sniper” in the spotlight. It topped the second week showings of films with spandex-clad heroes like “Dark Knight Rises,” “Spider-Man 3” and “Iron Man 2.” And it blew past the $53.2 million take of “The Passion of the Christ,” the previous best second week at the box office for an R-rated movie.

Dan Fellman, president of domestic distribution at Warner Bros, said “Sniper” was indeed playing like a superhero movie. The film’s 28 percent drop-off from its record-breaking first wide weekend was the best for any movie to open with more than $85 million, bettering the 38 percent dip of the original “Spider-Man” in May 2002.

“But this one’s even better for a lot of people, because this superhero is real,” said Fellman, who didn’t think the “Sniper” criticism had much of an effect.

“I don’t think you can really measure that, but the public has made up its own mind, and word of mouth is driving this movie,” he said. “One group thinks it’s a war movie and another group sees it as an anti-war movie. Whether it’s controversy or patriotism, Kyle being a hero or not, it doesn’t matter because everyone walking out of the theaters is checking the “A+” box in every category.”

The film received the rare perfect grade on CinemaScore last week, and Fellman said that was driving repeat business as the film continued to overperform in the Heartland.

Giant screens played a big role in the success of “American Sniper” once again. It brought in nearly $7 million from 388 theaters with Premium Large Format screens. And it added $5.8 million from 333 Imax screens, which accounted for eight of its top ten locations.

Producer Jason Blum may have been as big a factor as JLo in the success of the R-rated “Boy Next Door,” after bringing his micro-budget sensibilities to the $4 million thriller that co-stars Ryan Guzman and is directed by Rob Cohen.

That made it a financial win going in for Universal Pictures, which recently sealed a 10-year deal with Blum. The producer behind the “Paranormal Activity” franchise and other low-budget horror hits stepped outside the genre earlier this year with “Whiplash,” the $3 million Sony Classics music-school drama nominated for a Best Picture Oscar.

“The Boy Next Door” is the best opening for Lopez since the $23 million debut of “Monster-In-Law” in 2005. It was soon after that film that the pop diva put her acting career on the back burner to focus on music.

Critics weren’t turned on by “The Boy Next Door,” and have it at 11 percent positive on Rotten Tomatoes. But it received a “B-” CinemaScore from audiences. The crowd was mainly Hispanic at 45 percent, female (71 percent) and mature (65 percent over the age of 25).

Lionsgate’s art-heist comedy “Mortdecai” had plenty of star power, with Gwyneth Paltrow, Ewan McGregor, Olivia Munn and others. But the focus was on Depp because he hasn’t had a box office hit since 2011’s “Pirates of the Caribbean: On Stranger Tides,” the $1 billion Disney blockbuster.

The dismal reviews, which have it at just 13 percent positive on Rotten Tomatoes, didn’t help. Nor will the weak “C+” CinemaScore it received from audiences. But the crummy opening won’t be the end of the world for Depp or Lionsgate.

The actor has another “Pirates” movie coming in 2017. And Lionsgate is getting off relatively easily, since “Mortdecai” had a reasonable $40 million dollar production budget. That’s a lot less than the cost of Depp’s last three box-office flops, “Transcendence” ($100 million), “The Lone Ranger” ($225 million) and “Dark Shadows” ($150 million).

The Weinstein Company’s live action-CGI hybrid about the Brit bear from “Harry Potter” producer David Heyman finished third with $12.3 million in its second weekend, just a 35 percent drop from its opening. Nicole Kidman and Hugh Bonneville of TV’s “Downton Abbey” star in the PG-rated “Paddington,” written and directed by Paul King.

But the critics bashed it and have “Strange Magic” at an awful 11 percent positive on Rotten Tomatoes. Audiences, which were 71 percent families, were slightly more impressed and gave it a “B-” on CinemaScore.

Sony Pictures’ Kevin Hart-Josh Gad comedy “The Wedding Ringer” was fourth with $11.1 million in its second second weekend, a 45 percent falloff from its debut. That pushed its domestic total past $39 million, and Hart’s Screen Gems movies have now generated more than a quarter of a billion dollars combined at the worldwide box office on budgets under $75 million.

Liam Neeson’s “Taken 3” followed in fifth with $7.5 million and the 20th Century Fox franchise finale has a $76 million domestic total after three weeks.

It held off “The Imitation Game.” The Weinstein Company jumped the historical drama starring Benedict Cumberbatch by 414 theaters on Friday, and it brought in nearly $7 million from 2,025 locations. That ups its domestic total to $60.4 million and lifts it past “The Grand Budapest Hotel” as the second-highest grossing Best Picture Oscar-nominated film this year.

It looks like “Birdman,” the black comedy that took top honors at Saturday night’s Producers Guild Awards, is getting a bump from its awards buzz. It brought in $1.9 million from 833 theaters and raised its domestic total to just under $31 million after 15 weeks for Fox Searchlight.

The highest-grossing Best Picture Oscar nominee by far is “American Sniper,” which has taken in nearly $250 million globally in less than two weeks.