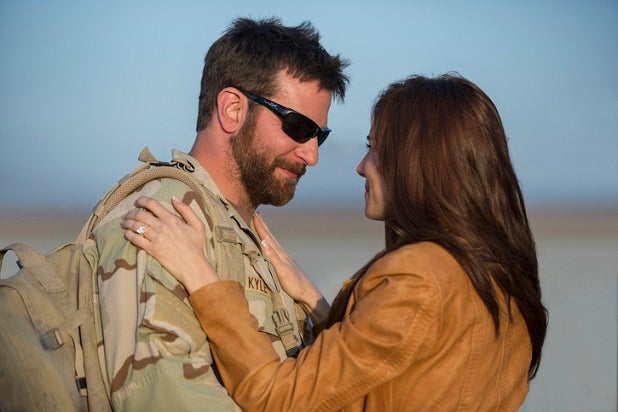 The Iraq War movie “American Sniper” is heading for a patriotism-fueled $35 million nationwide opening one week from Friday, according to pre-release tracking. And the Clint Eastwood-directed drama starring Bradley Cooper and Sienna Miller will bring some real box-office ammo if it hits the mark at the Oscar nominations a day earlier.

Village Roadshow’s R-rated “American Sniper” was adapted by Jason Dean Hall from Chris Kyle’s autobiography of the same name, and follows his struggles to be a good father and husband while fighting in Iraq.

The critics are sold and the movie is currently enjoying a 74 percent positive rating on Rotten Tomatoes. Audiences were even more impressed, and gave it a rare “A+” CinemaScore.

The film’s setting and patriotic themes have the potential to strike a major chord with Heartland and military audiences, and the studio’s marketing team will look to build on that.

Last year, Universal’s Afghan war drama “Lone Survivor” did just that and opened to $37.8 million in January after a similar Oscar-qualifying limited run in December. It went on to gross more than $125 million domestically. It won for Sound Editing and Mixing, but was otherwise passed over at the Academy Awards..

“American Sniper” has an A-list director in Eastwood. Cooper, who is currently the hottest ticket on Broadway in “The Elephant Man,” didn’t receive a Best Actor nomination from the Golden Globes or SAG Awards, but Oscar voters may tend to differ.

While it’s not one of the frontrunners, “Sniper’s” Producers Guild nomination is a sign that it’s a strong contender for an Oscar Best Picture slot. It was also nominated by the American Cinema Editors and the Art Directors Guild, which shows that it has below-the-line support.