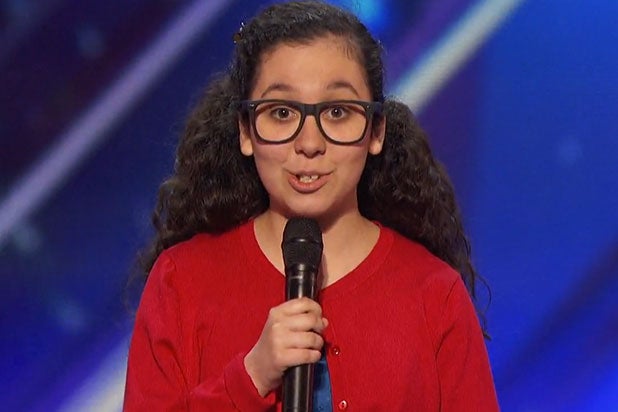 A 13-year-old stand-up comedian delivered an amazing dig at Donald Trump on “America’s Got Talent” — one that even received a standing ovation.

Lori Mae Hernandez will appear on Tuesday’s episode of the talent show. In the clip obtained by The Huffington Post, Hernandez tells the judges that she was inspired to start doing standup three years ago when her dad was diagnosed with Bell’s palsy, which she says made it hard for him to smile.

Hernandez started her bit by saying she gave up a really important job to be on “America’s Got Talent” — babysitting.

“My only qualification to be a babysitter is that I used to be a baby,” she told the audience. “That’s crazy, that’s like saying, ‘Hey, you’re sick a lot, you want to be my doctor?’

“Or, ‘Weren’t you the host of a reality show? You want to be President of the United States?'”

The audience and the judges roared with laughter, prompting many to give the teenager a standing ovation.

Let’s see what Trump has to say about that.