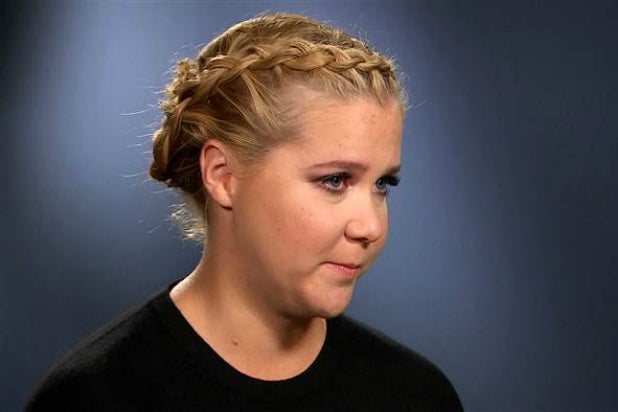 Comedian and current Hollywood “It” girl Amy Schumer sat with Maria Shriver on Friday’s “Today” show, when the topic at hand was far more sincere than the stand-up tends to tackle.

Schumer became teary-eyed while talking about body image issues, the woman who saved her from them and how the comic plans to give back to others as a result.

“It’s an emotional thing,” Schumer said, one day ahead of her HBO stand-up special from Harlem’s Apollo Theater. “It’s been a struggle for me my whole life, and especially just being in the entertainment industry. Standing on a stage in front of people, I can’t perform my best or be confident if I’m not sure — if I’m pulling at something [I’m wearing]. And sometimes, I would just want to throw in the towel and be like, ‘I’m not gonna go do stand-up tonight.'”

“My sister and I, we both have always dressed badly,” Schumer told Shriver. “Leesa had given me this gift of showing me how to dress and feel good. And she didn’t have to do this, she just did.

“She shopped for my sister also, and seeing my little sister wearing a little blazer and a shirt and looking just like a strong, beautiful woman, it was … to see this person I care the most about being given those tools was really moving for me.”

“And I just wanted to give it to every woman,” she added.

That’s exactly what Schumer aims to do, as the Comedy Central star has teamed up with Goodwill of Southern California to educate and inspire women through fashion. She also has a message for women who compare their bodies to what they see on TV or in magazines.