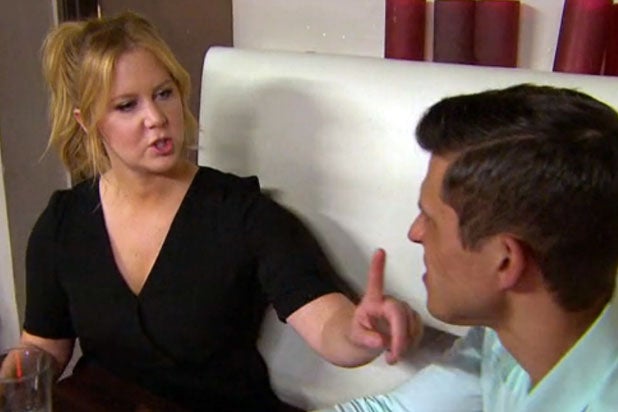 Comedian Amy Schumer made a guest appearance on Monday night’s episode of “The Bachelorette” to mentor the contestants before they performed stand-up at a comedy club. Instead, the “Inside Amy Schumer” star ruthlessly took down the house heavy, J.J., with the Twittersphere cheering her on.

“I want to make you feel better … You’re not,” she responded.

During the confessional portion of the episode, Schumer remarked, “J.J.’s a sweetheart, he’s just missing, like, charisma and humility and a sense of humor.”

Users on Twitter loved Schumer’s antics, the best reactions to which are below:

.@amyschumer trying to make these guys funny is as futile as trying to make JJ a current investment banker. #TheBachelorette — Michael (@MichaelGarofola) May 26, 2015

I’m going to need @amyschumer to continue to entertain me on #TheBachelorette …. Love her! #draftamy — Donna (@britchiq) May 26, 2015

It’s Amy Schumer! She is adorable! And a fan of #thebachelorette. “You sit at home and judge other people and think, ‘I’m fine!'” EXACTLY. — Jennifer Weiner (@jenniferweiner) May 26, 2015

The real winner is anyone who gets to meet @amyschumer. #TheBachelorette — Dana Weiss (@Possessionista) May 26, 2015

Where has @amyschumer been all my life? She is HYSTERICAL. She needs to be on EVERY episode of #TheBachelorette ! — Olivia Hook (@OliviaHook1) May 26, 2015

Dear @ABCNetwork, I was not happy that you let men choose which woman got to be #TheBachelorette, but you made it up with @amyschumer. — Katie Perry (@yesimkatieperry) May 26, 2015

Can @amyschumer be on every episode of #TheBachelorette??? #shejustsaidturd — Julie Jamieson (@JulesJamieson78) May 26, 2015

Watch Schumer coach/shred the guys below or click here.