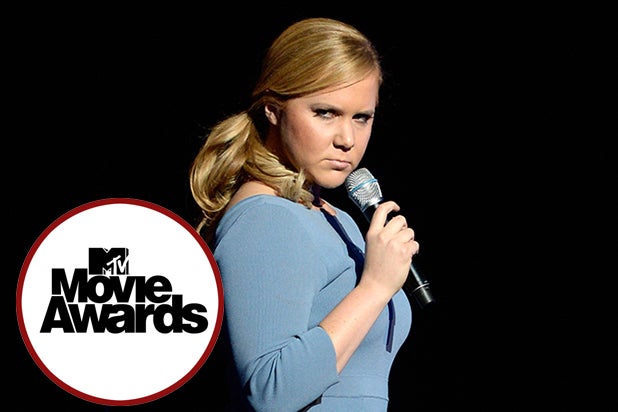 The writer-creator-star of “Inside Amy Schumer” has been tapped to host the 2015 MTV Movie Awards, which will air live from the Nokia Theatre in downtown Los Angeles on Sunday, April 12, 2015 at 9 p.m. ET.

Schumer’s unveiling came at the end of an hour-long hijacking of MTV’s social media, in which she blasted news and jokes on the network’s Snapchat, Twitter, Instagram, Facebook, Vine and Tumblr accounts.

“I am honored to be hosting the awards,” she wrote. “I will carry the audience with me like a teen mom #breaktheinternet #breakmywater.”

Schumer’s big break came as a contestant on Season 5 of NBC’s “Last Comic Standing” in 2007. She didn’t win, but soon after had appearances on HBO’s “Curb Your Enthusiasm,” FX’s “Louie” and HBO’s “Girls.” Eventually she created, produced, wrote and starred in her own Emmy-nominated Comedy Central series, which returns for Season 3 next year.

Schumer is also poised to do big things on the big screen in 2015. She wrote and stars in Judd Apatow‘s upcoming comedy “Trainwreck,” which co-stars Daniel Radcliffe, Marissa Tomei, LeBron James, Bill Hader and Brie Larson.

“Wickedly funny and sharply insightful, Amy Schumer is perhaps the most ascendant talent in comedy today and she’s on the brink of an epic year,” said Stephen Friedman, President of MTV, in a statement on Wedneday. “We are thrilled to work with Amy to create an unpredictable and hilarious showcase for Hollywood’s biggest blockbusters and brightest stars in what promises to be the most combustible Movie Awards ever.”

Jesse Ignjatovic of Den of Thieves, Lee Lodge and Garrett English serve as executive producers for the “2015 MTV Movie Awards,” which honors the best films and performances of the year while teasing upcoming summer blockbusters.