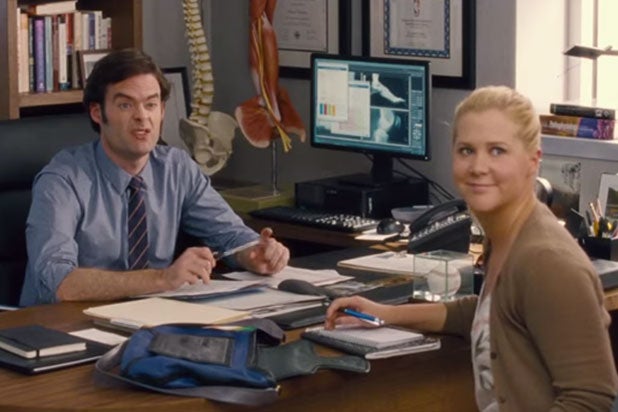 Amy Schumer‘s “Trainwreck” is on track for a win its opening weekend, grossing a respectable $1.8 million at the box office on Thursday night.

Universal opened the R-rated comedy at 2,363 theaters starting at 8 p.m. The fifth film directed by Judd Apatow had a modest production budget of $35 million, and predictions for its opening weekend are between the high-teens and $20 million.

Schumer wrote the screenplay and stars as a free-spirited men’s magazine journalist whose rejection of monogamy is tested when she meets a sports doctor played by Bill Hader. In addition to directing, Judd Apatow produced alongside Barry Mendel.

So far, on Rotten Tomatoes, 84 percent of the audience liked the movie, with an average rating of 7.3/10. Meanwhile, 87 percent of reviews from critics were positive.

This weekend’s other opener is Marvel’s “Ant-Man,” which is expected to open in the $60 to $65 million range at 3,800 locations. That should put it just ahead of Illumination Entertainment’s “Minions,” which grossed $115.7 million after premiering last weekend, and is on track to pull in around $55 to $60 million in its second outing.

“Ant-Man,” starring Paul Rudd, cost $130 million to produce and is expected to continue Marvel’s recent successful track record, but fall considerable short of the last two openers, “Avengers: Age of Ultron” and Disney’s “Guardians of the Galaxy,” which debuted at $191 million and $94.3 million, respectively.

Michael Douglas, Evangeline Lilly and Corey Stoll are the other stars in the comic book adaptation, directed by Peyton Reed.

“Ant-Man’s” Rotten Tomatoes score so far is slightly below that of “Trainwreck.” 77 percent of critics praised the superhero flick, while its audience score hangs even more favorably at 91 percent.