In the end, “The Hurt Locker” shrugged off the barrage of last-minute criticism and came out of awards season in exactly the same way it went through most of it: as the consensus pick as the best film of 2009. 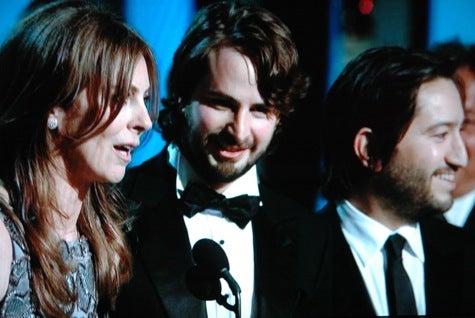 And at an Oscar show that tried to do lots of things in new ways, the freshest and newest came not from the producers of the show.

It came from the voters in the Academy, who named Kathryn Bigelow Best Director, the first woman ever to be so honored and only the fourth to be nominated in the 82-year history of the Oscars.

It was a night in which almost every pre-show favorite emerged as winner, a night in which nobody could upset Jeff Bridges or Sandra Bullock or Christoph Waltz or Mo’Nique in the acting categories, or “Up” or “The Cove” in the Animated and Documentary races.

The only significant surprise was “Precious” writer Geoffrey Fletcher’s win for Adapted Screenplay over Jason Reitman’s and Sheldon Turner’s “Up in the Air,” which had won the Writers Guild award and most critics awards.

And although “Avatar” won awards for Visual Effects, Art Direction and Cinematography, “Locker” was clearly the film of the night. It seemed clear that the Academy liked the little movie better than the big one.

How did the $21 million (and that’s worldwide) "Hurt Locker" do it?

1. It had a release date that allowed the film to stand out. The summer is not the time for serious war dramas; it’s a time big, brain-dead movies like “Transformers: Revenge of the Fallen.” And if films about armed conflict are released between Memorial Day and Labor Day, they’re usually popcorn war movies, like “Inglourious Basterds.”
So when “The Hurt Locker” came out in June, it was seized on by critics as something new and refreshing. Audiences didn’t go, but critics were appreciative of the respite from usual summer fare, and they didn’t forget.
2. For months, it remained in the comfortable position of a longshot, not a frontrunner. While “Up in the Air” and “Precious” got all the heavy awards buzz, “The Hurt Locker” was the little movie that hadn’t been forgotten – but neither was it facing the scrutiny of those presumed favorites. It was the movie everybody figured was good enough to make the Best Picture line-up – but mostly because that lineup had been expanded to 10.
3. As other movies fell away, it was primed to move up. Before the movies had been seen, most Oscar-watchers envisioned Best Picture slates that included “Invictus” and “Nine” and “The Lovely Bones,” or at least two of those films. Slowly and steadily, as those major players stumbled, the chances for “Hurt Locker” got better and better. “Inglourious Basterds” took the same ride, as did “District 9.”
4. The critics took the lead. As late as December, “Hurt Locker” was a movie whose Oscar chances were hurt by its lackluster box-office figures. Was it even going to be seen by enough Oscar voters? The critics groups, meanwhile, were expected to go for a variety of films, including “Up in the Air” and maybe even “A Serious Man.” But when one after another gave their top honor to “Hurt Locker” — L.A., New York, Chicago, Boston, Toronto — it went from being one of the films fighting to be seen to the one that every Oscar voter had to move to the top of that pile of screeners. And once they watched it, the movie made its points.
5. It established itself as the prime alternative to the populist sentiment of the season. The Academy moved to 10 nominees to bring more popular movies into the Best Picture mix; “Avatar” became the biggest movie ever made; the Oscar show started booking the likes of Miley Cyrus and Taylor Lautner in an attempt to bring in young viewers. But what if you’re one of those uncomfortable with the stars of “Twilight” on the stage of the Kodak, or bothered by the fact that “The Blind Side” is a Best Picture nominee? For those voters, “The Hurt Locker” became the clear way to strike a little blow against the Academy’s blatant moves toward populism.
6. It had an irresistible storyline. The battle of the exes? The first woman to win Best Director? Nobody could turn away from those narratives.
7. The guilds brought it home. With the critics’ groups in lockstep, the film took one more crucial step, and that was the Hollywood guilds. Bigelow was always a strong bet for the DGA award, but the big shocker was the Producers Guild. When the PGA went for the little movie over the big one, aided perhaps by the preferential system of counting ballots, “The Hurt Locker” acquired an almost unstoppable momentum.
8. In one major category, it assumed an air of inevitability. At a certain point in the race, James Cameron, Jason Reitman, Lee Daniels, Quentin Tarantino all started saying that Bigelow was going to win Best Director, and that she deserved it. Those two categories, picture and director, almost always go hand-in-hand; by conceding one to Bigelow, her rivals gave her an almost unsurmountable advantage in the other.
9. Its filmmakers were not tainted by the actions of one producer. “Hurt Locker” producer Nicolas Chartier made the stupidest campaign violation of the season, and paid for it with the loss of his invitation to the Oscar show. But there was never any suggestion that the overzealous emails from Chartier, who was already on the outs with the rest of the filmmakers, was speaking for them or doing anything of which they were even aware.
That allowed the controversy, and the punishment, to focus on one man, not on the movie.
10. When things got extraordinarily ugly, they stayed above the fray. In the final days of voting, attacks suddenly came from all sides: the film wasn’t accurate, some soldiers didn’t like it, etc. Screenwriter Mark Boal answered some of the charges, but Bigelow (who ended up sick in bed after the grueling schedule and transatlantic travel finally took its toll) stayed out of sight and never got sucked into the mess.
What could have degenerated into mudslinging began to look more like opportunistic piling-on, which may have hurt the rivals of “The Hurt Locker” as much as it hurt the Best Picture winner.
x
Looks like you're enjoying reading