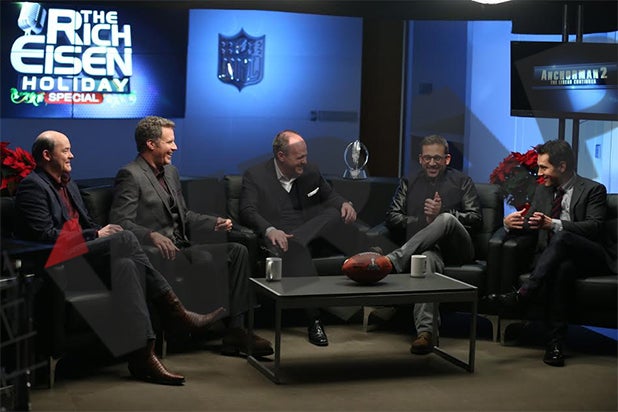 The latest stop for the heavily promoted “Anchorman 2: The Legend Continues” cast is the NFL Network’s “Rich Eisen Holiday Special.”

The face of the NFL Network and host of the aptly-named Rich Eisen Podcast welcomed Will Ferrell, Steve Carrel, David Koechner and Paul Rudd to his set. The four were not in character for the 30-minute conversation, which airs on Christmas Eve.

“Having four top flight actors and comedians, who are at the top of their craft, sit down for the ‘Holiday Special’ was a total blast,” Eisen told TheWrap. “Ron Burgundy would be proud.”

Eisen holds two specials a year for his audience. The last was the “Rich Eisen Kickoff Special” in September, which coincided with the opening of the National Football League season and featured Matt Damon, Larry David, Kevin Costner, Jennifer Garner and Carrie Underwood.

That special did very well in its own right. The 2013 edition of the “Rich Eisen Kickoff Special” out-delivered its year-ago performance across the board. It was up 29 percent in viewers year-over-year and it also more than doubled its advertiser-coveted 18-49 demographic audience, with a 128 percent ratings increase. The season-opening special was among the top 10 most-watched programs of the 51 specials that aired on The NFL Network during that time period.

Here’s another look at the holiday fun: 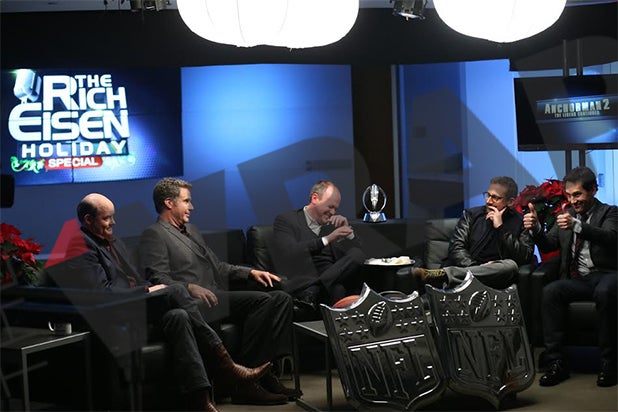