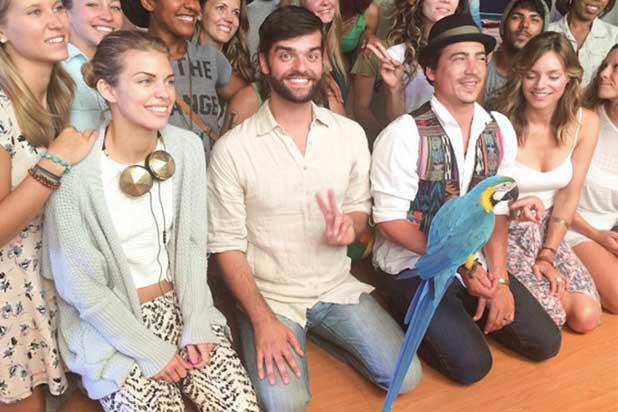 Actor and ’90s heartthrob Andrew Keegan has created a religion. Fifteen years after starring in the Shakespeare-for-teens classic “10 Things I Hate About You,” he finds himself heading up a Venice Beach-based “spiritual movement” called Full Circle.

It all started after he was jumped by a Venice Beach, Calif. gang in 2011. “The significance of this occurrence is that it happened at the same time the tsunami hit Japan,” the actor told Vice.

Keegan and the rest of the Full Circle crew now hold regular meetings in an old church. “Synchronicity. Time. That’s what it’s all about,” Keegan said, explaining his organization’s name. “Whatever, the past, some other time. It’s a circle; in the center is now. That’s what it’s about.”

The Vice reporter who was welcomed into their movement was greeted by more than just a nearly forgotten film star — he also encountered a giant blue talking parrot, a doorman named Third Eye, and an Australian man who claimed to have been pals with Keegan’s deceased “10 Things” co-star, Heath Ledger.

Part of the gathering the reported attended devoted to praying for a peaceful end to the conflict in Gaza. “We’re very, very aware of the shift that’s happening in the mind and the heart, and everybody is on that love agenda,” Keegan said. “We’re very much scientifically, spiritually, and emotionally aware of how it works, meaning that there’s power in the crystals, there’s power in our hearts, there’s an alignment, there’s a resonance … and it transfers through water.”

“I had a moment where I was looking at a street lamp and it exploded,” he added. “That was a weird coincidence. At a ceremony, a heart-shaped rose quartz crystal was on the altar, and synchronistically, this whole thing happened. It’s a long story, but basically the crystal jumped off the altar and skipped on camera. That was weird.”

Keegan, who did not immediately return TheWrap‘s request for comment, told Vice he’s viewed within the group as a visionary, but insisted Full Circle was not a cult.