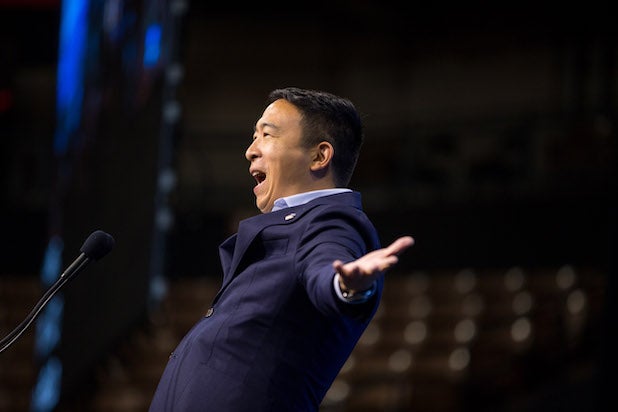 “I’m going to do something unprecedented tonight,” the entrepreneur announced. “My campaign will now give a freedom dividend of $1,000 a month for an entire year to ten American families — someone watching this at home right now.”

“If you believe you can solve your own problems better than any politician, go to Yang2020.com and tell us how $1,000 a month will help you do just that,” he added, plugging his campaign website. “This is how we will get our country working for us again, the American people.”

The giveaway which will open an online raffle for submissions next week, according to Politico, will award 10 randomly selected families with a total of $120,000, paid out in $1,000 monthly increments — a move that follows his campaign’s platform for universal basic income, which would give $1,000 a month to every American citizen 18 years and older.

The entrepreneur and his campaign had been teasing the stunt in the days leading up to the debate with #YangsDebateSurprise on social media and a promotional video.