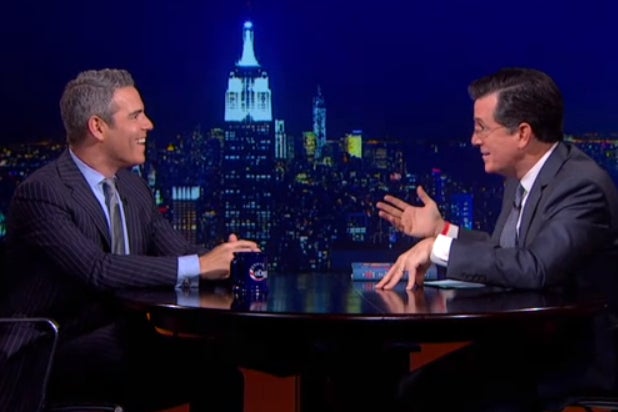 To make the host of Bravo’s “Watch What Happens Live,” Andy Cohen, feel right at home on Comedy Central, Stephen Colbert got drunk before interviewing his Monday night guest.

Then, he paid Cohen a compliment: “I love the ‘Real Housewives,'” Colbert said. “I gots to have my Nene.”

Cohen was on “The Colbert Report” to promote his new book, “The Andy Cohen Diaries: A Deep Look at a Shallow Year.” Colbert went with the title and theme, pointing out the “epic shallowness” that he knows Cohen for.

Also read: 'The Daily Show' Has White People Explain Why Latinos Are So Damn Terrifying (Video)

“It’s a safe place, we could say it — Malala: such a star-fucker at this point, right?” Colbert quipped, in character.

“You think that too? Me too!” Cohen played along, calling her “a pain in the ass.”

Then the two cable hosts planned a deeper dive into the “Real Housewives” franchise, settling on a handful of super-small towns for the next installment.

“I like the idea of five women in mom jeans holding corn at the beginning of the show,” Cohen admitted.

“I think they’re just as equally capable of alcoholism and rage,” Colbert added.