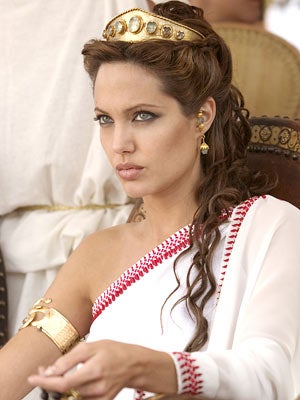 Now here’s a casting match made in movie heaven.

Oscar winner Angelina Jolie is attached to star in the "Cleopatra" movie that Oscar-winning producer Scott Rudin has been developing since 2006, according to USA Today.

Rudin’s office then confirmed that the project "is being developed for and with Jolie," who Schiff describes as having "the perfect look" to play the character.

Calls to Rubin’s office by TheWrap were not immediately returned.

As for who would play Julius Caesar in the movie, Schiff was stumped, but she did say that Jolie’s partner Brad Pitt would be a "no-brainer" to play Marc Antony.

Rudin acquired the rights to Schiff’s tome back in 2006 after reading a ten-page proposal.

The closest the "Salt" star has come to playing this kind of part was her turn as Colin Farrell’s mother (despite a one year age difference) in Oliver Stone’s "Alexander."

Elizabeth Taylor most famously played the regal role in Joseph L. Mankiewicz’s "Cleopatra," which was the highest grossing film in 1963 yet lost money for 20th Century Fox due to its then-enormous $44 million budget.

More recently, director Steven Soderbergh was developing a 3D musical version with Catherine Zeta-Jones, Hugh Jackman, Ray Winstone and a score from Guided By Voices, but that production was put on the back burner when Sony pitched "Moneyball" to the Oscar-winning filmmaker, who swung and missed the chance to direct.