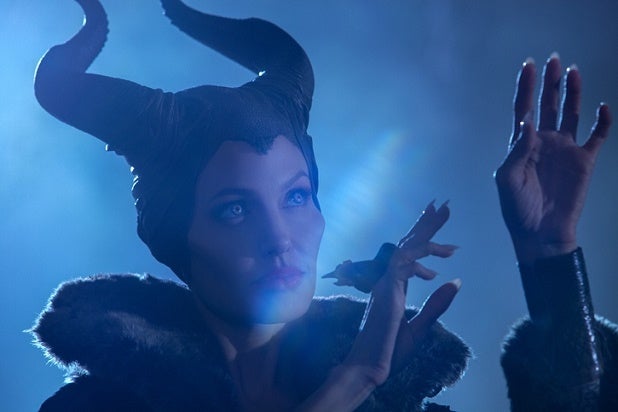 “Maleficent,” the live-action fantasy from Disney starring Angelina Jolie, is heading for a $60 million-plus box-office opening, according to early tracking that came online Thursday.

Disney’s $180 million re-imagining of its 1959 animated classic, in which Jolie plays the Mistress of All Evil, will open nationwide on May 30. The early tracking numbers are intended more as a marketing gauge than a box-office indicator and the studio wasn’t talking, but the number has to be good news for Disney. “Maleficent” is opening against Universal’s R-rated Seth MacFarlane comedy “A Million Ways to Die in the West.”

The primary target audience for “Maleficent” is young girls and their moms, as it was for Disney’s animated blockbuster “Frozen,” and this will be the summer’s first tentpole movie that targets women. The early tracking — comparable to the first numbers on “Oz the Great and Powerful” — suggests that it’s connecting with parents and that Jolie’s considerable star power is having a big impact.

Robert Stromberg is making his directorial debut on the PG-rated “Maleficent,” which co-stars Elle Fanning, Sharlto Copley and Juno Temple. Stromberg was the production designer on “Alice in Wonderland” and “Oz the Great and Powerful,” two other live-action classic-based fantasies from Disney. “Alice” was a billion-dollar blockbuster in 2010 and last year’s “Oz,” which starred James Franco, rang up $493 million globally.

“Oz the Great and Powerful” debuted to $79 million, but that was in March, a less crowded corridor than “Maleficent” will be in this summer. “Maleficent” is opening one week after Fox’s “X-Men: Days of Future Past,” which is looking very strong, and one week before Fox’s “The Fault in Our Stars.”

“Maleficent” is still three weeks out from its opening, which means it should build momentum as Disney’s massive promotional campaign hits high gear. It will be featured extensively on the Disney Channel, and Jolie and Fanning, in Europe now, will be hitting the U.S. publicity circuit soon.