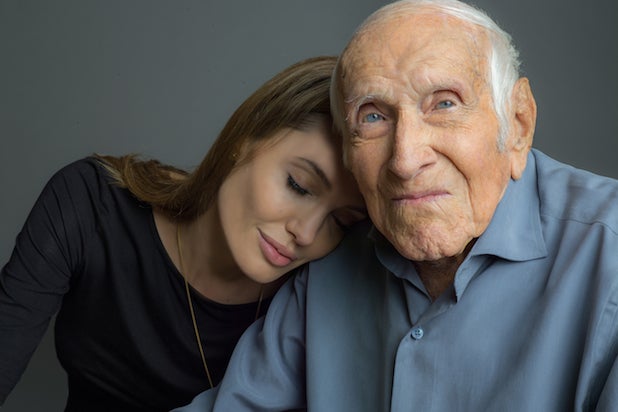 Universal has unveiled the first image of anything related to Angelina Jolie‘s upcoming directorial effort, “Unbroken,” a film about the life story of Olympian and World War II hero Louis “Louie” Zamperini.

Jack O’Connell (“Skins”) is set to play Zamperini, who posed with Jolie in the picture above, which teases their collaboration on the film that has been in development at Universal since the studio acquired the rights to his life story in 1957. The film was originally planned as a starring vehicle for Tony Curtis as his follow-up to “Spartacus.”

“It will be hard to make a film worthy of this great man.  I am deeply honored to have the chance and will do all I can to bring Louie’s inspiring story to life,” Jolie said in a statement accompanying the photo. “Everyone involved in the film shares this deep responsibility.  Like all readers of Laura’s book and all people who love and admire Louie, I am a fan who has learned so much.  He has made me a better person.”