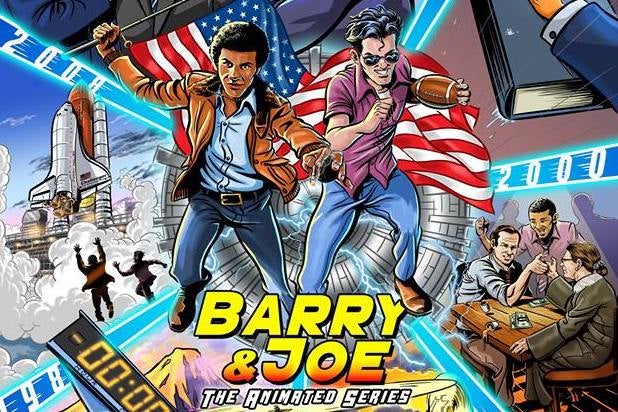 Writer/director Adam Reid really misses Barack Obama and Joe Biden, so much so that he’s turned to Kickstarter to raise funds to make a pilot for an animated series that turns the former President and Vice President into a time-traveling, crime-fighting duo.

Titled “Barry & Joe: The Animated Series” and sporting the tagline “Hope Is On the Way,” the project is looking for $100,000 for “storyboards, recording, animation and sound design” on a prologue and pilot that will be made as proof of concept.

According to the Kickstarter page, the pilot will show Obama and Biden being taken to a secret facility shortly after Donald Trump’s inauguration, where they are shown a project “run by a team of the world’s greatest scientists and occasionally Elon Musk.”

Soon, they are transported back in time and find themselves in the bodies of their younger selves. With only the voice of Neil DeGrasse Tyson (whom Reid hopes to bring on to the project to voice himself) as their guide, Obama and Biden must find each other in the past and then find a way to travel to an alternate timeline with a better future.

Reid says on the page that the show is for people who “miss Obama and Biden as much as we do” or are “connoisseurs of brilliantly cheesy 80’s television and science fiction.” But he also promises that the show won’t just pander to Obama supporters, as he also wants to reach out to “anyone on the right side of the political spectrum who enjoys watching the left get all worked up and finds themselves engaged by the rich storyline and surprising depth.”

“If you’re like me, you’re more than a bit concerned lately about the fate of our country, our planet, and humanity itself,” Reid writes. “I dream about how the world might be different if we could go back in time and make better choices understanding what we know now. If only there was some way to set things right.”

The Kickstarter, which was launched at the end of July, has currently raised just under $29,000 with 12 days to go.