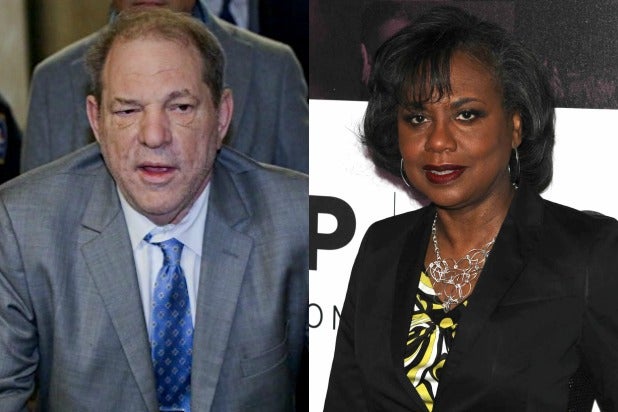 Anita Hill on Monday added her voice to the many other women who spoke out about Harvey Weinstein’s guilty verdict, saying that although many deem it as a victory for the #MeToo movement, it’s “only the beginning.”

A New York jury on Monday found Weinstein guilty of third-degree rape and a first-degree criminal sexual act, ending a months-long criminal trial in Manhattan that focused on the testimonies of six women who accused him of sexual assault. He could face up to 29 years in prison.

“Today’s verdict in the Weinstein case is a clarion call of justice for the countless women whose voices have been suppressed in workplaces throughout society,” Hill said. “The Hollywood Commission’s mission does not end with the long overdue prosecution of Mr. Weinstein. Our goal of guaranteeing a safe work environment throughout the entertainment community remains more important than ever.”

She continued, “We must continue to develop policies and practices that make systemic change permanent and to foster a culture that reflects such change. It is our hope that more district attorneys will rethink which cases they present for trial and provide appropriate critical expert witness testimony to support those cases. Though one conviction is only the beginning, the Hollywood Commission views the Weinstein verdict as a strong statement to our industry that when we honor the voices of survivors progress is possible.”

Weinstein was handcuffed and remanded into custody after the verdict was handed down but was transferred to Bellevue Hospital instead of his original destination of Rikers Island, Weinstein’s spokesperson Juda Engelmayer, told CNN’s Chloe Melas. He was ordered into custody until his sentencing on March 11.

Hill was appointed to lead the Hollywood Commission in 2017. Hill came to prominence in 1991 for testifying during Justice Clarence Thomas’s Senate confirmation hearings that he had sexual harassed her in the workplace.

“Today is the perfect day to do your part — all you have to do is VOTE!” says photographer Elisabeth Caren

Shooting some of the powerhouse participants in TheWrap's Power Women Summit, photographer Elisabeth Caren wrote: "It is my hope that these images, photographs from the past of courageous women who had worked tirelessly and risked everything to get us where we are today, projected onto the fearless women who are doing the hard work to keep the equality movement progressing, will inspire us all to do our part to keep the movement moving forward every day. And today is the perfect day to do your part -- all you have to do is VOTE!"