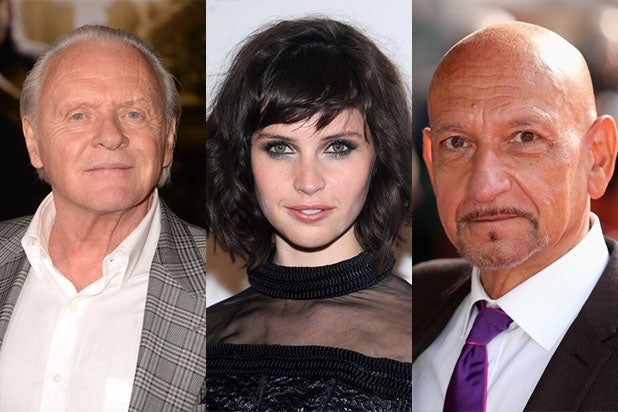 Oscar winners Anthony Hopkins and Ben Kingsley, as well as Felicity Jones, have signed on to join Nicholas Hoult in Silver Pictures’ action-thriller “Autobahn,” it was announced Thursday by Joel Silver and Stuart Ford, CEO of financier IM Global.

Production starts Monday on the film, which has received additional financing from Sycamore Pictures and DMG Entertainment.

Eran Creevy (“Welcome To the Punch”) is directing from a script by F. Scott Frazier.

In “Autobahn,” a young American couple played by Hoult and Jones are plunged into an adrenaline-pumping game of cat-and-mouse across Germany when they find themselves caught between two ruthless criminals, played by Hopkins and Kingsley.

Silver will produce through his Silver Pictures banner along with Ben Pugh of 42 (“Welcome to the Punch”), Brian Kavanaugh Jones of Automatik (“Insidious”).

Also read: Felicity Jones in Negotiations to Star in ‘Rosaline,’ a Revisionist Take on ‘Romeo & Juliet’

“When I first read F. Scott Frazier’s script for ‘Autobahn,’ I knew it had the makings of a great action movie. It’s a gritty, adrenaline-fueled thrill ride through Europe with an incredible cast,” said Silver.

“We are firm believers in Eran Creevy as one of Europe’s most talented young directors and it’s exciting to have assembled such a great pool of both up and coming and illustrious talent,” added Ford.

Hoult next appears in “X-Men: Days of Future Past” and “Mad Max: Fury Road,” while Jones can be seen in “The Amazing Spider-Man 2.”

Hopkins currently co-stars in “Noah” and will soon be seen in the serial killer thriller “Solace.” Kingsley will be seen later this year in Ridley Scott‘s “Exodus: Gods and Kings” and “Night at the Museum 3.”