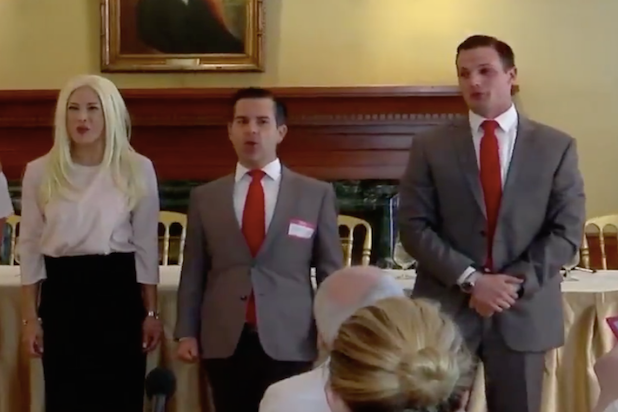 A new musical about the first family is coming to New York City, with the help of former White House Communications Director Anthony Scaramucci.

“The 1st Annual Trump Family Special,” will run every Thursday evening in the Big Apple’s Triad Theater from September 13th to December 6th, according to a press release put out by the show.

“‘The 1st Annual Trump Family Special, is an original musical comedy spoofing the first family in a YUGE way! In this hilarious send-up, Trump’s brood has gathered to perform in a live televised event for the new Trump TV network,” reads a plot description.

Also Read: After Sam Seder Returns to MSNBC, Jeffrey Lord Asks, What About Me?

“But when the orange man-of-the hour runs late, host Ivanka stalls by interviewing the various family members, which leads to a wide array of clever character songs. And when they are “off camera,” we find out what the family’s really thinking.”

Cast and crew gathered at New York City’s Princeton Club last Wednesday to announce the news in a press conference which included a musical number and remarks from the former White House official.

A sneak peak of what the show might look like was provided to Reuters, which posted the clip on Twitter, Monday. Contrary to Reuters’s suggestion however, Scaramucci has no formal role with the production and has not contributed any financing, a rep for the show told TheWrap.

From the White House to Broadway: Anthony Scaramucci brings a musical about the Trump family to the stage pic.twitter.com/2lIirKQY2q

“If you can’t tap into the consummate showman that Donald Trump is, you’ll never understand the man or his governance style. Part of that, and I can tell you personally, is having a sense of humor,” Scaramucci told TheWrap. “This show is lighthearted, fun very clever, and I was proud to help them launch it.”

Since leaving the White House, Scaramucci has tried a variety of schemes to keep his name in the news. Most notably the financier tried his hands at becoming a media entrepreneur with the launch of the Scaramucci Post. The account’s Twitter was popular for a time, but mostly jumped the shark after a poll asking how many Jews died in the Holocaust last October.

He has also returned to his first occupations running Skybridge Capital and serving as a co-owner of the New York City restaurant Hunt and Fish club.