Hollywood studios might want to pick up a computer science class or two, with a new report predicting that Apple’s App Store could overtake the global box office in total revenue in 2018.

Apple is poised to rake in at least $100 million per day from the App Store this year, according to Asymyco analyst Horace Dediu. He argued that the app revenues would be enough to surpass the $39.9 billion in global movie ticket sales that comScore reported for 2017.

“As of this year the App Store alone will overtake Global Box Office revenues,” said Dediu. “The App Store, and Apple services overall, is becoming one of the largest enterprises in the world.” 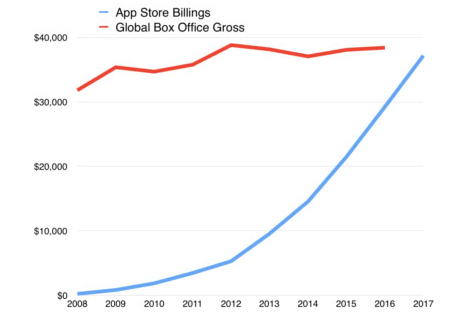 Apple is already off to a strong start in 2018: The tech behemoth pulled in $300 million from App Store purchases on Jan. 1 alone. That was a 25 percent jump from the same day last year, and closed out a mammoth run of about $890 million spent between Christmas and New Year’s Day.

And with the recent launch of augmented reality-enabled apps on iOS — something that makes Apple CEO Tim Cook want to “yell out and scream” from excitement — the App Store has another option to lure in developers.

The Asymyco report underscores what investors noticed in 2017 — that Apple’s services sector is growing at a breakneck rate. Services hit $8.5 billion in revenue during its most recent quarter, a 34 percent jump year-over-year.

Dediu estimated $180 billion in “economic activity” stemmed from iOS devices last year — which comes out to about half of all mobile commerce.