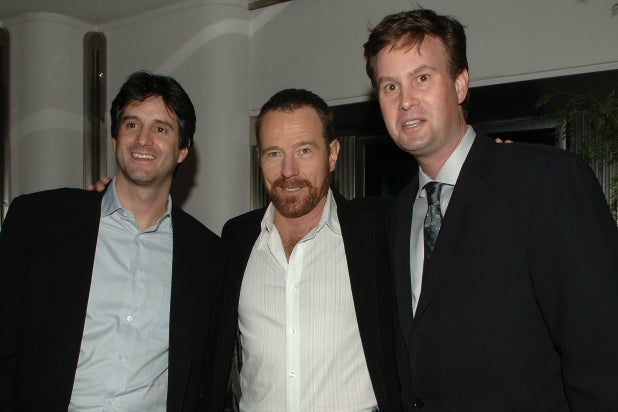 The duo were presidents at Sony TV since 2005, where they were responsible for “Breaking Bad,” “Better Call Saul” and “The Crown,” among other hits.

“Jamie and Zack are two of the most talented TV executives in the world and have been instrumental in making this the golden age of television,” said Eddy Cue, Apple’s senior vice president of Internet Software and Services. “We have exciting plans in store for customers and can’t wait for them to bring their expertise to Apple — there is much more to come.”

Under Erlicht and Van Amburg, Sony’s slate of original primetime series more than tripled. Their roster of programs — which have won 36 Emmys — also included “The Blacklist,” “Bloodline,” “The Goldbergs,” “Justified,” “Rescue Me,” “The Shield,” “Sneaky Pete” and more.

“It will be an honor to be part of the Apple team,” said Erlicht. “We want to bring to video what Apple has been so successful with in their other services and consumer products — unparalleled quality.”

“Apple has a relentless focus on delighting customers with their products,” said Van Amburg. “We will bring that same intention to Apple’s programming and we could not be more excited about what lies ahead.”

Finally, here’s Sony Pictures Entertainment CEO Tony Vinciquerra’s email to staff from Thursday, when he shared the news there internally:

I want to make you all aware that Zack Van Amburg and Jamie Erlicht will be leaving Sony Pictures Television later this summer to begin a new chapter in their extraordinary careers.

Zack and Jamie have been instrumental in the growth of Sony Pictures Television over the last several years – particularly over the last year as they took on a greater leadership role alongside Keith Le Goy, President of Distribution; Amy Carney, President, Advertiser Sales, Strategy & Research; and Andy Kaplan, President of Worldwide Networks.

Until a replacement is named for Zack and Jamie, I will be working closely with our existing leadership team to ensure a seamless transition.

I want to wish Zack and Jamie all the best. While we are sad to see them go, we are excited by the opportunity to work with them as partners in the future.