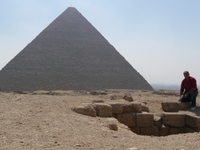 We are diligently tracking down the origins of the masterpieces that Zahi Hawass wants to borrow, and eventually reclaim from Western museums. There is no legal claim to the statue taken from the pit where my archeologist guide, Essam, is crouching. This is the mausoleum, or mastaba, of Hamiunu, whose statue is now at a museum in Hildesheim, Germany. Hamu-who? Precisely. None of us know the name of the man who designed what is perhaps the greatest monument ever built by mankind, the Great Pyramid, some 2500 years before the birth of Christ (his grave, unmarked today, overlooks his masterpiece, but consists of nothing but a pile of mud and sandstone). Hamiunu designed this for his pharaoh Khufu, or Cheops in Greek, who was buried within. The pyramids, subject of poetry and legend for millenia, deserve every drop of ink and bead of sweat ever expended on them. Should the sole knowledge we have of its designer be located at the museum being built nearby? That’s the question. On another front, I also interviewed a lawyer today who is working on a new law that would allow Egypt to sue for artifacts it believes were stolen, much as Greece and Italy have been busy doing. The law is expected to be introduced in the fall. More fireworks can be expected to follow. (photo copyright: sharon waxman)