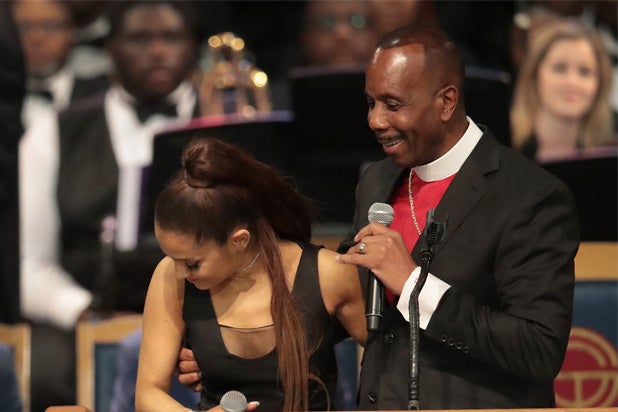 Bishop Charles Ellis III, who officiated Friday’s funeral for Queen of Soul Aretha Franklin, offered an apology to singer Ariana Grande for a perhaps “too friendly” touch of the singer and a misfired joke about her name.

“It would never be my intention to touch any woman’s breast,” Ellis told the Associated Press after photos circulated of him with his arm around her midsection well-above the waist and his hand close to her right breast.

“I don’t know, I guess I put my arm around her,” he told the AP. “Maybe I crossed the border, maybe I was too friendly or familiar but again, I apologize.”

Ellis also apologized for making a joke during the service about mistaking Grande’s name for a new item on the menu at Taco Bell.

“I personally and sincerely apologize to Ariana and to her fans and to the whole Hispanic community,” he said. “When you’re doing a program for nine hours you try to keep it lively, you try to insert some jokes here and there.”

Grande, who sang Franklin’s hit “(You Make Me Feel Like) A Natural Woman” during the service, also attracted attention for wearing a short black minidress that some online commenters felt was inappropriate for a church service.

Ellis hoped that the dust-up would not be a “distraction” from the real purpose of the ceremony. “This is all about Aretha Franklin,” he said.

A rep for Grande did not immediately respond to TheWrap’s request for comment.