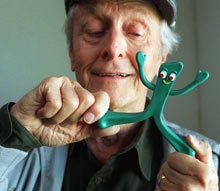 Art Clokey, the creator of the iconic cartoonish clay figure Gumby, died in his sleep on Friday at his home in Los Osos, California, at age 88, after battling repeated bladder infections, his son told Reuters.

Clokey, 88, invented the whimsical green clay character Gumby in the early 1950s that debuted on the "The Howdy Doody Show" and went on to become the star of his own successful television show, "The Adventures of Gumby."