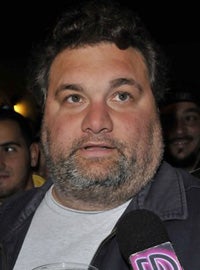 Artie Lange returned to the stage at a New York comedy club over the weekend in a pair of surprise stand-up performances — the first time the comedian has appeared in public since his January suicide attempt.

Lange hasn't been seen or heard from since the incident, in which he stabbed himself nine times with a kitchen knife. (His mother found him bloodied in his Hoboken, New Jersey apartment and called 911.)

Lange left his gig as Howard Stern's Sirius sidekick in December, mysteriously canceling stand-up gigs for the remainder of the year.

Some of Lange's fellow comedians relayed jokes from his sets to Page Six.

"Well, folks, I gotta say I am so glad that Fashion Week is over because I am f—ing exhausted," Lange said opening the show, according to comic Craig Gass.

He did not talk about his suicide try directly, though he did admit spending the last eight months in a psychiatric ward "playing Scrabble."

Lange appeared to have lost some weight, too, according to Gass.

Gass added: "He had a good line about how a year ago he was going through withdrawal from heroin, and his agent came up with the great idea, 'Hey … you should start Twittering!'"

Stern producer Gary Dell'abate said he's been in contact with Lange, who wants to come on the show to tell his story — but no word on a permanent return.