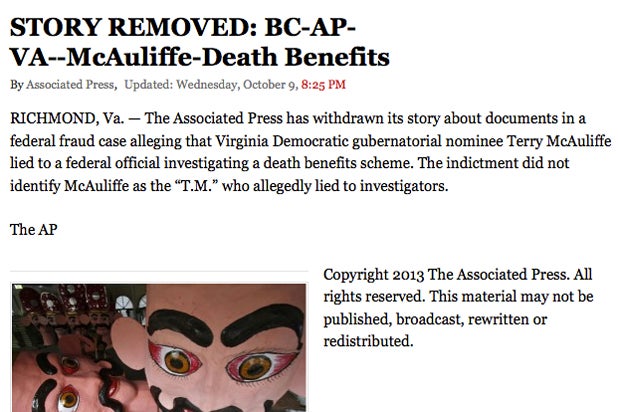 The AP made a major error on Wednesday in a report that accused Terry McAuliffe, a candidate in Virginia’s gubernatorial race, of lying to a postal inspector during an investigation into an insurance scam.

The AP’s Virginia political reporter Bob Lewis mistook a man referred to in an indictment relating to the case by the initials “T.M.” for McAuliffe. McAuliffe was mentioned by name in the documents, but only as an investor into what would later turn out to be an insurance scam that used the identities of terminally ill people to obtain death benefits from insurance companies.

“T.M.,” on the other hand, was accused of lying to a postal inspector who was investigating the case. Though he apparently has the same initials as McAuliffe, he is a completely different person.

The AP posted a story naming McAuliffe as the man who lied to the inspector based on those initials. That story also went out to its thousands of member organizations, such as the Washington Post, which posted the story directly to their websites.

The McAuliffe campaign, which had apparently never been reached for comment before the AP’s story went up, quickly denied the story to a local NBC affiliate, saying: “The person referenced on page 68 is absolutely not Terry McAuliffe since he was a passive investor and did none of the things referenced: First, he was not interviewed by law enforcement on April 20, 2010; rather, he was in Richmond for a day of meetings.”

The AP took the rare but necessary step of pulling the story and issuing a retraction shortly thereafter (though over an hour and a half after its initial story was posted), writing: “The Associated Press has withdrawn its story about documents in a federal fraud case alleging that Virginia Democratic gubernatorial nominee Terry McAuliffe lied to a federal official investigating a death benefits scheme. The indictment did not identify McAuliffe as the ‘T.M.’ who allegedly lied to investigators.”

On Thursday, the AP’s new version of the story identified McAuliffe as an investor only, noting: “There is no allegation of wrongdoing by McAuliffe or that he or other investors knew of efforts to defraud the terminally ill. The Associated Press withdrew a story Wednesday night that said McAuliffe was accused in court documents of having lied to a federal investigator looking into the benefit scheme; those documents referred to someone by the initials “T.M.,” but did not identify McAuliffe as that person.”

Less than an hour after the AP’s retraction, Lewis tweeted: “The error was mine and I take responsibility for it.”