The organizers of the Astroworld Festival have been hit with a new lawsuit that seeks $750,000,000 in damages. The suit was filed Tuesday by lawyers from Houston-based Buzbee Law Firm on behalf of 125 clients.

In addition, Buzbee representatives say that the firm will be filing another lawsuit “in the coming days” on behalf of an additional 100 plaintifs.

“We filed suit today on behalf of 125 clients, including Axel Acosta. Axel was killed during the Astroworld concert. His death was needless, and was the result of gross negligence. The firm intends to file another lawsuit in the coming days with another 100 named plaintiffs,” Tony Buzbee said in a statement. “Note that the first defendant named in our 55-page petition is Apple Music; the lawsuit seeks $750,000,000. The Buzbee Law firm believes, based on its ongoing investigation, that Apple Music, Epic Records and many other corporations that stood to profit from Astroworld will share legal blame in a court of law, in front of a Texas jury.” 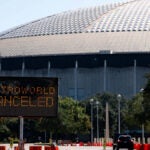 The lawsuit summarizes much of the disaster that occurred Nov. 5 at Houston’s NRG Park, when a crowd surge during the headlining performance by rapper Travis Scott caused a stampede, resulting in more than 300 people injured and eight deaths during the festival. A ninth victim died the next week.

It names more than 15 defendants, including Scott, real name Jacques Bermon Webster, and Drake, real name Aubrey Drake Graham, Apple Music and Live Nation, among others. The suit is demanding a jury trial, and seeks $500,000,000 in actual damages and another $250,000,000 in exemplary damages, in addition to court costs.

The case has been assigned to the 164th Civil Court in Harris County, Texas.