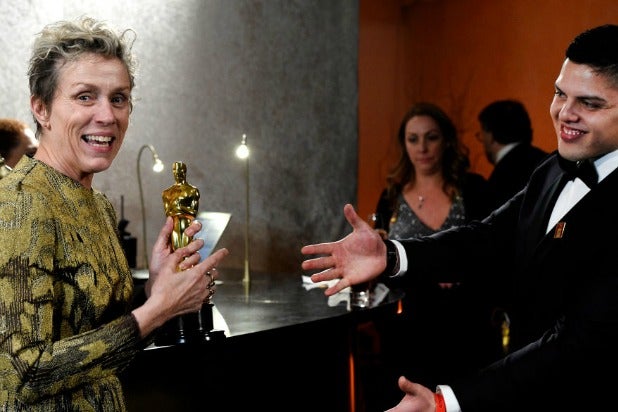 The relief was palpable for a scandal-worn Hollywood at the Governors Ball on Sunday night —  at the familiarity of the Oscar ritual, at the results of the awards. Finally tradition was back and respected and for a minute no change was needed.

The industry needed a moment to catch its breath after the laserlike scrutiny of the media around #TimesUp, and from nonstop waves of business consolidation and cultural criticism. And, hey, it was nice to have a telecast with a minimum of catastrophic screw-ups.

There was lots of love in the room for Guillermo del Toro, winner for both Best Picture and Best Director. He said all the right words at the podium, and it’s undeniable that he has become a beloved figure across the industry through this awards season.

“It’s justice,” said Alejandro Innaritu, who has himself twice won Best Director and Best Picture, for “The Revenant” and “Birdman,” and is one of Del Toro’s closest friends. He was beaming with pride, even though it wasn’t his win.

“The guy has been giving himself and his imagination and curiosity and his heart in every film,” he went on. “And after 25 years he’s recognized in this way — something came back.”

There were deep sighs of joy, and relief too, around the Fox Searchlight table. The arthouse studio released both “Shape of Water” and “Three Billboards Outside Ebbing, Missouri” and had a well-deserved moment of triumph — playing to win at the Oscars without the resources of the bigger competitors (including parent company Fox).

The studio’s many wins on Oscar night might dissipate, at least a little, the nimbus of anxiety that hangs over its future as it heads toward a new owner in Disney. Nancy Utley, Steve Gilula and all their executives seemed practically bent over from joyful exhaling, and hovered like happy parents around their winners and nominees – including Richard Jenkins and Sam Rockwell. Even past Fox studio chief Jim Gianopulos (now running Paramount) couldn’t stay away.

We buttonholed Frances McDormand who responded with a sharp – “What are you looking for?” – before we could get out “Congratulations and what about this inclusion rider?”

She paused to explain: “It’s a contractual thing that’s been in place for a long time. I didn’t know about it and I’ve been in the business for 35 years. But anyone negotiating a contract – director, writer, actor – we can have an inclusion rider saying we ask for at least 50 percent diversity in the cast and the crew.”

Can that be achieved when so many movies don’t have an equal number of roles for men and women?

The balance can be spread, she explained.

“Just look a little bit closer, you’ll find not tokenism but you can find someone ready to step into that role who is diverse,” she said.

There’s a question of whether or not this is practical in the tough negotiating byways of the business — but “that’s the hope,” said her agent Brian Swardstrom, acknowledging that it probably can’t happen overnight.

Meanwhile, business rivalries were spread across the room, unspoken and present. Bob Iger and his team — who won Oscars for “Coco” and its song, and whose “Black Panther” rules at the box office — was on one side of the ballroom. Meanwhile, Comcast chief Brian Roberts stood with the Universal and Focus team on the other side. The two chieftains are effectively facing off over the European cable behemoth, Sky, which Comcast just swooped in to try and buy out from under Rupert Murdoch, who is in the middle of a deal to sell his movie and TV assets to Disney.

Everyone seemed to have the same idea. Exhaustion from the business mano-a-mano and the do-not-call-him-by-his-Harvey-Weinstein name was like a spell spread all around the room.

For an hour or two, it was like movie heaven.