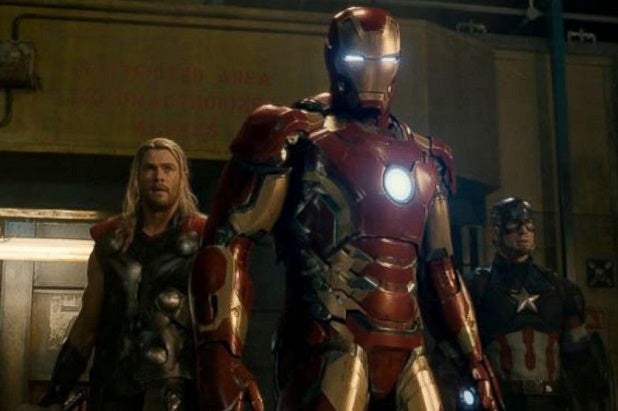 Marvel’s superhero sequel “Avengers: Age of Ultron” continued to etch its name into the box office record books Friday, rolling up another $21.3 million and positioning itself for an $85 million second weekend triumph at the box office.

“Age of Ultron” is heading for the second-best second weekend ever, behind only the $103 million that the original Marvel superhero mash-up managed in its second weekend in 2012. And it would easily be the best second weekend by any movie this year, ahead of “American Sniper” ($64.6 million) and “Furious 7” ($59.5 million).

The Reese Witherspoon-Sofia Vergara comedy “Hot Pursuit” ran a very distant second with $4.2 million from 3,003 theaters in its first day Friday and is looking at $12 million opening weekend, MGM and Warner Bros.’ New Line had hoped for a bit more from the female-targeting PG-13 cop caper, particularly on Mother’s Day weekend. But bad reviews — 6 percent on Rotten Tomatoes — may have taken a toll. Audiences weren’t impressed either and gave it a weak “C+” CinemaScore.

On its current pace, the second weekend by “Age of Ultron” will be off roughly 55 percent from its $191.2 million debut last weekend. That opening was the second-best ever as well, behind only the $207.4 million first weekend of “The Avengers,” which fell off 50 percent in its second weekend.

While its becoming clear “Age of Ultron” won’t match the domestic haul of “The Avengers” for Disney, the sequel remains on pace to out-earn it overseas and beat the $1.51 billion it eventually took in at the worldwide box office. That would make it the third-highest-grossing film ever, behind only James Cameron‘s 2009 blockbuster “Avatar” ($2.8 billion) and his 1997 epic “Titanic” ($2.2 billion). The worldwide total for “Avengers: Age of Ultron” is up to $735 million.

“Age of Ultron” has taken in $257 million domestically and will be around $315 million after Sunday. “The Avengers” was at $373 million after two weekends in domestic release. The blockbuster sequel directed by Joss Whedon has taken in more than $478 million from abroad after two weekends in release, however, while “The Avengers” was around $425 million overseas at a similar point, though it’s not a direct comparison because of varying dates and countries.