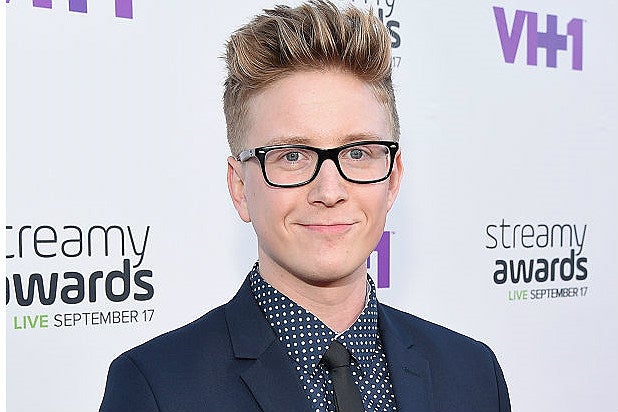 Awesomeness Films will release their Tyler Oakley documentary “Snervous” in December in select theaters and on all major digital platforms worldwide, the studio announced Wednesday.

Directed by Amy Rice (“By the People: The Election of Barack Obama”), the film follows the life and career of the 26-year-old digital icon through his sold out Slumber Party tour across the U.S., U.K. and Ireland. After eight years of seeing snippets of his life online, viewers will see the intimate truth of Oakley’s relationship with family, followers and fame on his international tour.

“Tyler Oakley brings an incredible and inspiring message to his global fan base,” Kaplan, president of Awesomeness Films, said. “We are excited to share an unfiltered and behind-the-scenes look into his world.”

Oakley uploaded his first video in 2007 while he was a freshman at Michigan State. He now has over 350 videos online with over 490 million views, over 7 million subscribers and 21 million followers on social media. Oakley has become one of the biggest social media stars of this generation, working with collaborators such as Grace Helbig, Jenna Marbles, Hannah Hart, Tanya Burr, Darren Criss and many more.

From being a resident advisor on campus to a teacher’s assistant, Oakley likes to give back to the community as well. He is a big supporter of the Trevor Project, an organization for which he raised over $1 million. In 2014, he received the Teen Choice Award for Choice Male Web Star and Choice Web Collaboration as well as the Streamy Award for Entertainer of the Year and Activist Icon of the Year. In addition, he has written his own book titled “Binge.”

“I feel so lucky to partner with Awesomeness to bring my story to the big screen. I started out making videos as a way to connect and am thrilled by the opportunity to share one of the most exhilarating years of my life,” said Oakley, who is represented by Big Frame.

“Snervous” comes on the heels of Awesomeness Films’ release “Smosh: The Movie,” which debuted as the top comedy on iTunes, as well as “Expelled,” which also debuted atop the iTunes charts.